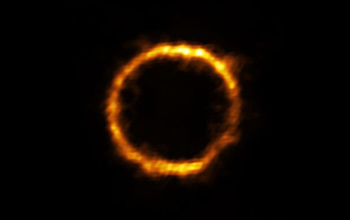 Astronomers have revealed a distant galaxy that looks surprisingly like our Milky Way.

Astronomers using the Atacama Large Millimeter/submillimeter Array (ALMA) have revealed an extremely distant and therefore very young galaxy that looks surprisingly like our Milky Way. The results are published in Nature.

The galaxy is so far away that its light has taken more than 12 billion years to reach us. We see it as it was when the universe was just 1.4 billion years old, 10% of its current age. It is also surprisingly unchaotic, contradicting theories that all galaxies in the early universe were turbulent and unstable.

The U.S. National Science Foundation-funded discovery increases knowledge of how galaxies form, giving new insights into the universe’s past.

“This result represents a breakthrough in the field of galaxy formation, showing that the structures we observe in nearby spiral galaxies and in our Milky Way were already in place 12 billion years ago,” says Francesca Rizzo, who led the research.

While the galaxy the astronomers studied, called SPT0418-47, doesn’t appear to have spiral arms, it has at least two features typical of our Milky Way: a rotating disc, and a bulge — the large group of stars packed tightly around the galactic center. This is the first time a bulge has been seen this early in the history of the universe, making SPT0418-47 the most distant Milky Way look-alike.

“Observing the distant past is vital to our understanding of galaxy formation,” says Joe Pesce, NSF program director for ALMA. “ALMA’s observational frequencies and its exquisite resolution allows just these sorts of game-changing, unexpected observations.”