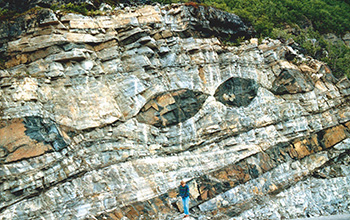 Our world’s surface is a jumble of jostling tectonic plates, with new ones emerging as others are pulled under. The ongoing cycle keeps the continents in motion and drives life on Earth. But what happens when a plate disappears into the planet’s interior?

The question has long puzzled scientists because conventional wisdom said that sinking tectonic plates must remain intact to keep pulling on the portion behind them, but according to geophysical evidence, they are destroyed.

Now, in a study published in Nature, scientists say they have found an answer that reconciles the two stories. Plates are significantly weakened as they sink, but not so much that they break apart entirely.

The U.S. National Science Foundation-supported finding came after scientists put tectonic plates through a computer-generated gauntlet of destructive geologic forces. The model shows that as the plate enters the mantle, it bends abruptly downward, cracking its cold, brittle back. At the same time, the bending changes the fine grain structure of the rock along its underbelly, leaving it weakened. Combined, the stresses pinch the plate along its weak points, leaving it mostly intact but segmented like a slinky snake.

That means the plate continues to be pulled under despite becoming folded and distorted.

“This study demonstrates the power of combining results from observations and experiments in computational models of dynamic processes in Earth’s interior,” said Robin Reichlin, a program director in NSF’s Division of Earth Sciences.

According to the researchers, the model predicted a scenario that matches observations from Japan. Studies of the region where the Pacific tectonic plate dives — or subducts — under Japan have turned up large cracks where the plate bends downward, and they have shown signs of weaker material underneath. Deep seismic imaging conducted by The University of Texas at Austin’s Steve Grand has also revealed tectonic shapes in Earth’s mantle under Japan that appear to be a close match for the slinky snake in the model.

Co-author Thorsten Becker of UT’s Jackson School of Geosciences said that the study does not necessarily close the book on what happens to subducting plates, but it offers a compelling case to explain several important geologic processes.