According to a study by the Imperial College of London, some 3 million deaths were averted in eleven countries – Austria, Belgium, Britain, Denmark, France, Germany, Italy, Norway, Spain, Sweden and Switzerland – because of lockdown measures including the closings of non-essential businesses and schools.

A separate study conducted in the United States and published alongside the British study Monday found that some 530 million cases of COVID-19 were prevented or delayed by lockdown policies implemented in China, South Korea, Italy, Iran, France and the United States.

The number of COVID-19 deaths worldwide neared 403,000 and the confirmed cases stands at more than seven million, according to data collected by the Johns Hopkins University’s Coronavirus Research Center.

The World Health Organization (WHO) warned Monday that while the situation was improving in Europe, it is worsening in other parts of the world.

“Almost 75% of yesterday’s cases come from 10 countries, mostly in the Americas and South Asia,” he added, noting increases in Africa, Eastern Europe, and Central Asia as well.

The United States remains the country with the highest number of deaths, followed by Britain, Brazil and Italy.

U.S. has also the highest number of confirmed cases, moving closer to two million, followed by Brazil with about a third of that number, and Russia and Britain.

The good news, however, came from New Zealand’s Prime Minister Jacinda Ardern, who announced Monday that the country had eliminated transmission of the new coronavirus. The New Zealand has decided to lift most of its remaining Covid-19 restrictions but will keep its borders closed.

Meanwhile, authorities across the United States are urging people who took part in protests of the death of George Floyd to get COVID-19 tests after more than a week of marches and close contact with each other.

“Get a test,” New York Governor Andrew Cuomo said, adding that the state is opening 15 new testing sites and telling people not to take any chances.  Similar calls for testing have come from state and city leaders in Atlanta, San Francisco, and Seattle.

As many as 400,000 people are expected to return to their jobs in New York Monday as the country’s largest city begins its first phase of reopening. Many will be using the subway for the first time in nearly three months.

Construction workers and those with jobs in factories, wholesale houses, and some retailers will be returning to work. Stores are offering curbside pickup only. But the city’s thousands of restaurants will remain closed at least through the rest of the month.

While New York City officials appeared confident enough to start to reopen, the Florida Department of Health announced another 1,180 new coronavirus cases Sunday, saying it was the fifth straight day the number of new cases exceeds 1,000.

Experts in Florida say people are becoming careless about social distancing since statewide lockdowns have eased. They also note that the numbers started rising when the George Floyd protests began.

“It came to our intelligence community. I’m on Armed Service (committee), so clearly there’s things I can’t discuss that I get provided information. But there’s evidence that they’ve been trying to either sabotage or slow it down,” Scott said on BBC television’s Andrew Marr Show, but declined to give any evidence for his claim.

The senator said China “won’t cheer” if the United States or Britain develops a vaccine before anyone else. 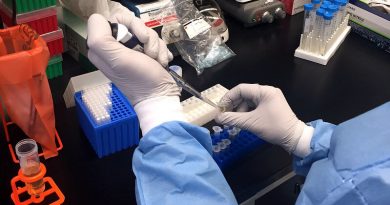 Five things you need to know about: mRNA vaccines