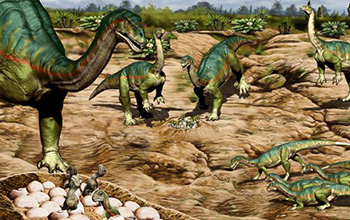 A fossil site in Patagonia shows that some of the earliest dinosaurs lived in herds.

Fossilized remains of sauropodomorphs — large, long-necked herbivores that lived during the Mesozoic Era — may provide the earliest evidence of herd living among dinosaurs, according to a study published in Scientific Reports.

Paleontologist Diego Pol and colleagues discovered the fossilized skeletal remains of 69 individuals and more than 100 eggs belonging to the sauropodomorph Mussaurus patagonicus in the Laguna Colorada Formation in Patagonia, Argentina.

The authors found that most of the eggs were arranged into clusters of between eight and 30 eggs. X-ray imaging of five of these clusters revealed that the eggs contained embryos and were arranged in two to three layers in trenches, suggesting that these were nests in a breeding ground.

The research, funded in part by the U.S. National Science Foundation, analyzed the size and type of bone tissue of the skeletal remains to determine the ages of the fossilized individuals. The scientists identified a cluster of 11 juveniles aged less than a year old, two adults found together and nine specimens aged between a year old and adult.

The scientists suggest that the presence of age-specific clusters of individuals in the same location could indicate that M. patagonicus lived in herds throughout their lives but primarily associated with others their own age within herds. Analysis of the rocks surrounding the remains suggests that they are approximately 193 million years old, predating previous records of complex social behavior among dinosaurs by more than 40 million years.

The researchers speculate that the evolution of complex social behavior among sauropodomorphs may have coincided with increases in body size that occurred between 227 million and 208 million years ago. Meeting the increased energy requirements associated with larger body sizes may have required  M. patagonicus to coordinate their behavior and form herds to forage over long distances.