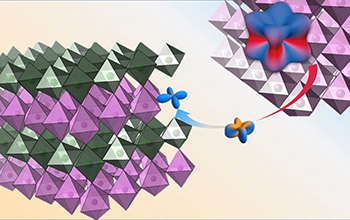 
Study could lead to improved control of materials properties

Note to physicists and materials scientists: You’d better reevaluate your work if you study iridium-based materials — members of the platinum family — when they are ultra-thin.

Iridium “loses its identity,” and its electrons act oddly, in an ultra-thin film when interfaced with nickel-based layers. The nickel has an unexpectedly strong impact on iridium ions, according to Rutgers University physicist Jak Chakhalian, senior author of a study in the journal Proceedings of the National Academy of Sciences.

The scientists discovered a new kind of magnetic state when they created super-thin artificial structures containing iridium and nickel. The results could lead to improved control of quantum materials and a deeper understanding of the quantum state for new electronics.

“It seems nature has several new tricks that will force scientists to reevaluate theories on special quantum materials,” said Chakhalian. “Our findings call for the careful evaluation and reinterpretation of experiments on ‘spin-orbit physics’ and magnetism when the interfaces or surfaces of materials with platinum group atoms are involved.”

The scientists found that at the interface between a layer containing nickel and one with iridium, an unusual form of magnetism emerges that strongly affects the behavior of spin and orbital motion of electrons. The newly discovered behavior is important because quantum materials with very large spin-orbit interaction are popular candidates for new materials and exotic superconductivity.

The research was funded by two awards from NSF’s Division of Materials Research.