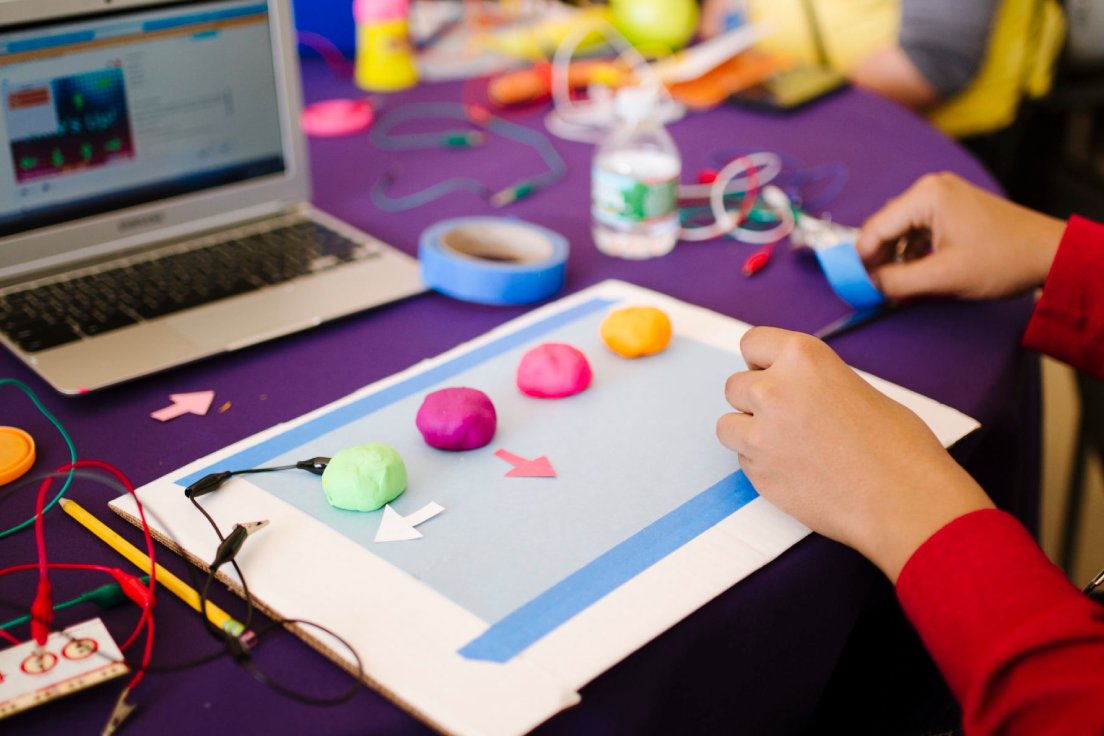 When we picture hands-on learning, usually a computer screen is nowhere in sight. But for the team behind MIT Full STEAM Ahead, “hands-on remote learning” may become the great new frontier for delivering quality K-12 online learning at scale.

Full STEAM Ahead began as an online resource hub to provide robust curated content to K-12 students, teachers, and parents during the first surge of the Covid-19 pandemic, when schools around the world started to shut down in rapid succession. With support from the Abdul Latif Jameel World Education Lab (J-WEL) and a monumental effort of coordination, the hub has grown into a vibrant learning community. Six months, 10 custom-created interactive learning packages, and two highly successful online summer programs later, the Full STEAM team has a lot to share about what makes engaging, effective remote learning experiences. Spoiler alert: it’s not high-tech gadgetry.

“Remote learning does not automatically mean ‘passive learning,’” says Claudia Urrea, senior associate director for pK-12 at J-WEL and co-leader of the project. “We’ve learned that with basic access to tech, and by using low-cost, widely available materials, learners can create and participate in effective hands-on learning, even at a distance.”

Perhaps MIT’s most ambitious response to date to the sudden crisis in pK-12 education, Full STEAM Ahead is a testament to the strength and ingenuity of MIT’s pK-12 community, and a demonstration of MIT’s “mens et manus” (“mind and hand”) motto in action. Within days of the full-campus evacuation in mid-March, members of MIT’s pK-12 education community came together on Zoom to organize a coordinated response. It was Professor Eric Klopfer, director of the Scheller Teacher Education Program (STEP), who first suggested an online resource hub with a highly interactive hands-on learning component, and signed on to lead the project along with Urrea.

In a matter of weeks, the core team had built the site and were compiling resources in consultation with local school systems. Office of Government and Community Relations K-12 Outreach Administrator Rohan Kundargi communicated with colleagues in the Cambridge Public Schools in order to better understand their students’ and teachers’ needs. As a result, the interactive site was able to meet Massachusetts data privacy and security requirements, making it easier for teachers to turn to as a resource.

The content gathered on Full STEAM Ahead ranges from interactive programming languages geared toward young or beginner-level users, such as MIT App Inventor and Scratch; high-quality STEM-content video lessons (MIT BLOSSOMS); and course materials such as MIT OpenCourseWare Highlights for High School, all of which can be filtered by subject or interest area. Sponsored by J-WEL, the Full STEAM Ahead website also features curated MIT resources for learners at the higher education and workforce learning levels, in keeping with J-WEL’s commitment to transforming learning across those groups.

For each of 10 weeks between mid-April and the end of the academic year, Full STEAM Ahead released a new themed “Learning Package,” scaffolded by age group, for K-12 students and teachers. Different organizations across campus committed to curating each new package, an effort coordinated in large part by STEP Research Scientist Aditi Wagh. Lemelson-MIT, the Edgerton Center, the MIT Museum, the Education Arcade, three groups from the MIT Media Lab (Personal Robots, Lifelong Kindergarten, and Space Exploration Initiative), and others helped young learners explore topics such as spread of disease, invention education, nature photography, and artificial intelligence through engaging, low-cost interactive activities. 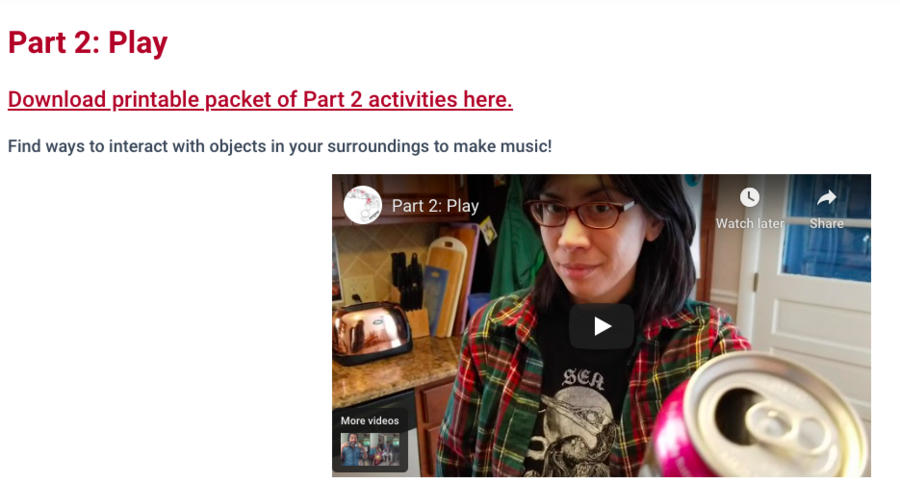 Making Music and Sounds, a two-part learning package from the Edgerton Center, encapsulated the program’s guiding principles of accessibility, adaptability, and hands-on exploration of STEAM subjects through creative means. Through short video tutorials, learners were encouraged to explore music and sound-making by creating basic instruments or collections of sounds using household objects such as soda cans, rubber bands, or dishware. Downloadable activity packets, divided by age group, provided guidelines for engaging in offline hands-on learning experiences. Other videos in the packages prompted learners to consider questions such as “What is music?” or to explore the physical characteristics of the musicalized objects and the sounds they could make.

Over the course of the 10-week release, the Full STEAM Ahead website received 130,000 page views from 45,000 unique viewers. Learners in 150 countries accessed the learning packages, including Australia, Brazil, Canada, Hong Kong, India, Japan, Mexico, Turkey, and the United Kingdom.

Recognizing that the potential for student learning loss would only grow as the universally haphazard school year ended, the Full STEAM Ahead team changed course heading into the summer. They reevaluated the needs of parents and teachers through conversations while gathering information from MIT students about their interest in mentorship opportunities, resulting in plans for an online summer program aimed at middle schoolers. The team worked with partner schools to target students at increased risk for “Covid slide,” or the phenomenon of falling behind because of the pandemic, as well as students from groups traditionally underrepresented in STEM fields.

The Full STEAM Ahead Into Summer (FSAIS) program received over 800 applications from students across the state of Massachusetts, ultimately welcoming 291 participants in grades 6-9 over the course of two three-week sessions. Thanks to funding from an anonymous donor and voluntary contributions from some participants’ families, FSAIS was able to send hands-on-learning kits to each participant, free of charge. MIT Open Learning Assistant Director for Special Projects Kirky DeLong oversaw efforts to assemble these kits, featuring an extensive collection of items ranging from basic office supplies to specialty items (cutting boards, small hacksaws, and water rocket launchers.) In addition to hands-on STEM activities, the program also offered a math-focused academic period run by STEP Program Manager Jenny Gardony and a book club run by STEP Research Scientist Meredith Thompson that featured the works of Christine Taylor-Butler ’81. 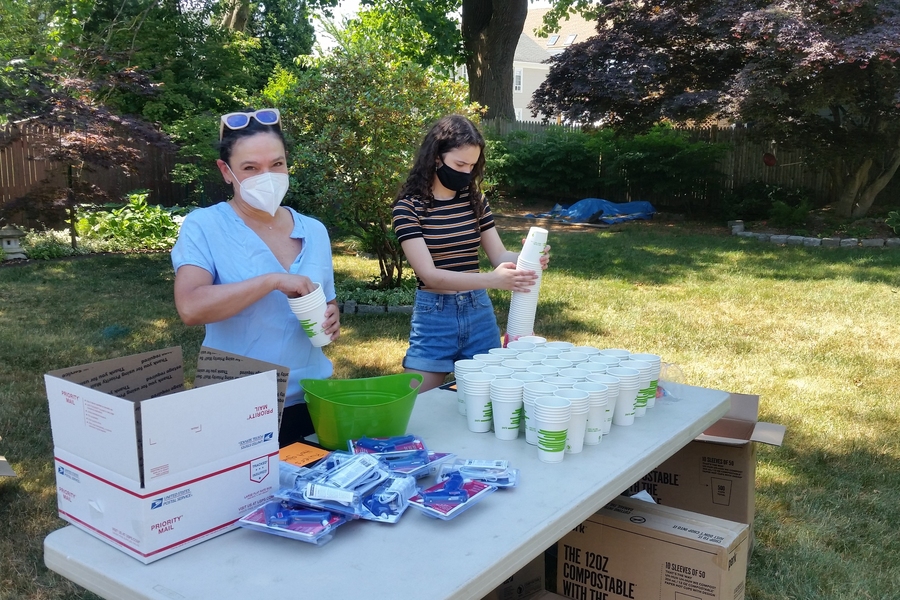 J-WEL’s Claudia Urrea and her daughter Martina work to assemble hands-on learning kits for use by students in the Full STEAM Ahead summer program. The kits were sent to each of the 291 participants free of charge, and included over 30 items ranging from general office supplies to specialty items such as hacksaws, cutting boards, and water rocket launchers.

The two programs kept students actively learning most of each day. According to student and parent feedback, there was nothing “passive” about their experiences; indeed, many of the comments could be describing traditional, in-person STEM summer camps. One parent remarked, “This was a phenomenal program for my son. I am so grateful for it, and I think it helped to build [his] confidence a bit where he was once defeated. He is more a bookworm than he is technical with his hands; however, this program allowed him … to do activities with his hands which he wouldn’t ordinarily do.”

Says pK-12 Program Coordinator Joe Diaz, “I was fairly skeptical about the prospect of bringing a true ‘learning-by-doing’ experience to the participating kids over an online platform, but between the guidance of the MIT student mentors and encouragement of the members of our team, it was great to witness the kids discovering skills with the same enthusiasm that we’ve come to expect in our in-person programs.”

Fall and beyond: expanding possibilities of hands-on remote learning

No one can say for sure how long parents and educators will need extra assistance delivering high-quality instruction to young learners. But it’s clear that the face of teaching and learning has been forever altered by the pandemic, and the lessons the Full STEAM Ahead team has learned will extend far into the future of 21st century education.

Urrea, Klopfer, and core team members from STEP, J-WEL, MIT Open Learning and OGCR will share their insights in a forthcoming case study to be included in a peer-reviewed publication from Harvard Graduate School of Education and the Qatar Foundation. Their contribution will join 26 other such case studies from universities across the world, focusing on the role of higher education in supporting pK-12 learning during Covid-19.

For Urrea, there are two keys to the success of the program to date: the first is the team’s ability to work together to leverage existing resources, both in terms of talent and available tools. The second is its guiding principle of meeting learners where they are. “Everything we do is designed to be accessible across socioeconomic strata,” she says. “We see this as an extension of MIT values, including a commitment to access and equality.”

There is an additional benefit to all this group work: a consolidated effort in which all members of MIT’s vast pK-12 community can participate. Klopfer notes that, although the many individuals, departments, labs, and centers have been coming together informally for years, “we haven’t had a focal point for a lot of collaboration. I think it’s fantastic that we now have that in Full STEAM Ahead.” 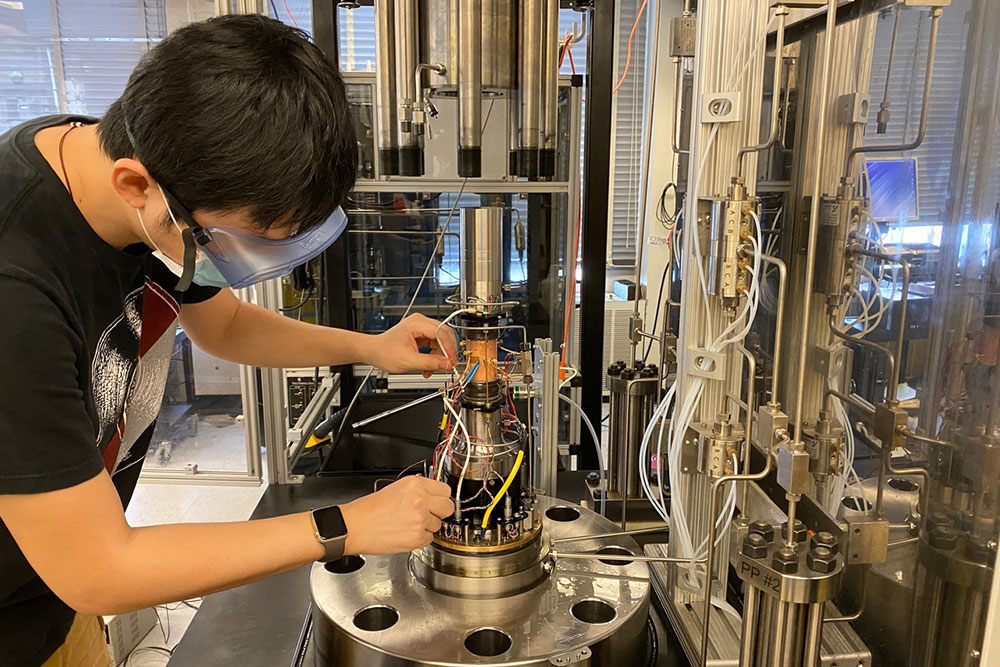 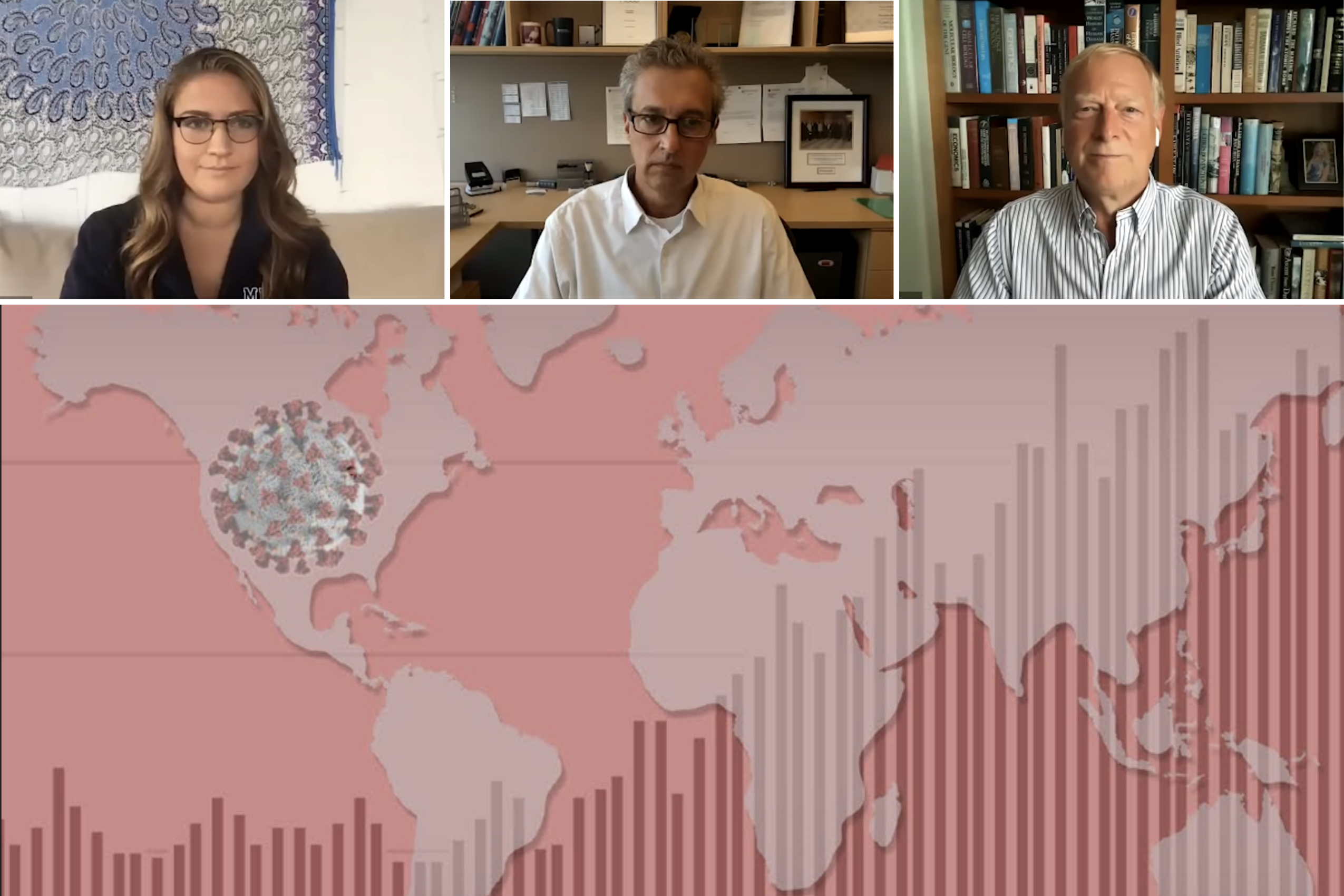 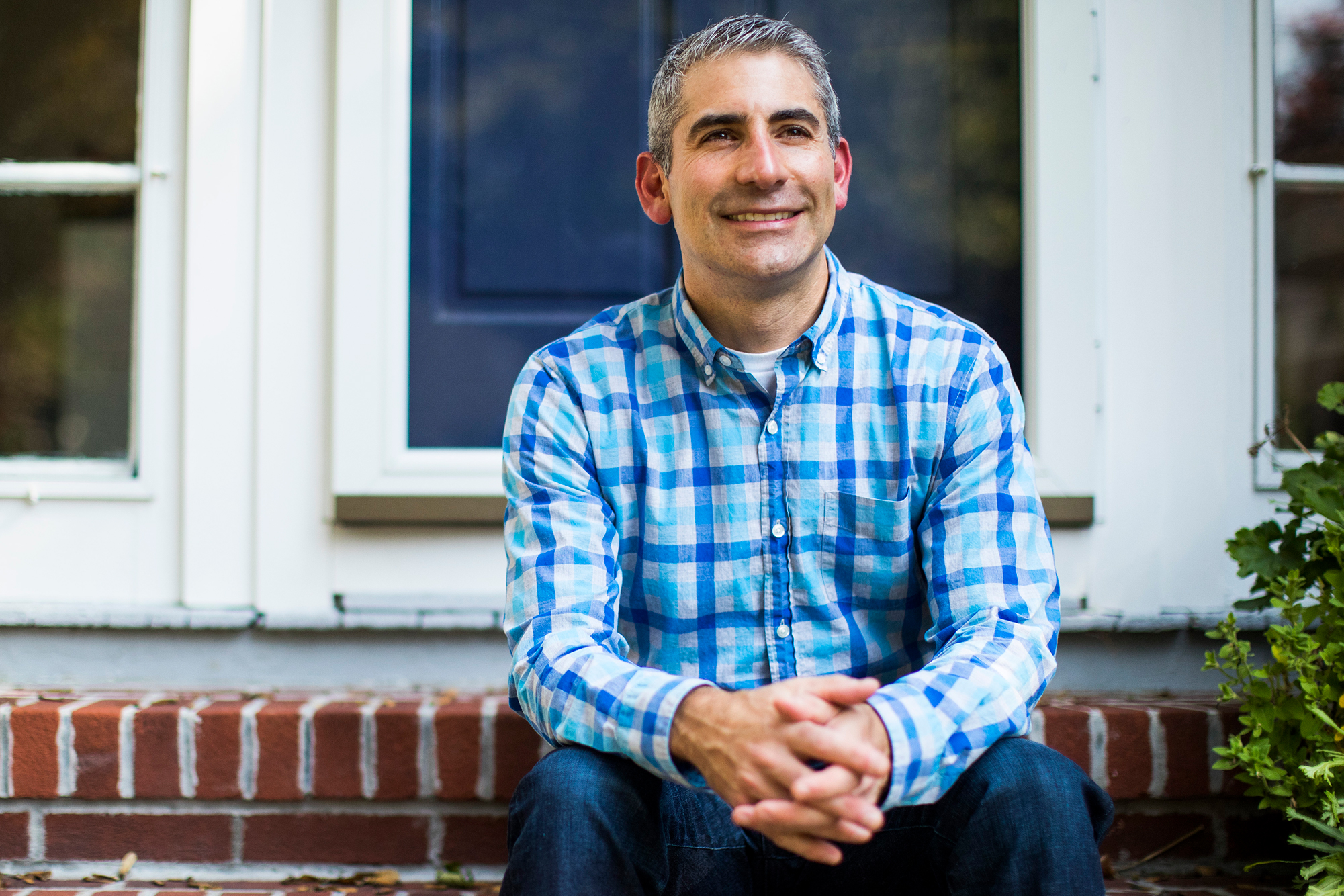