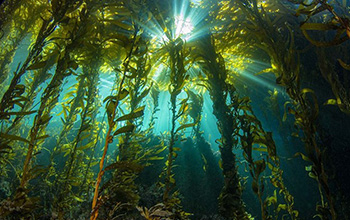 
Underwater communities rely on fast-growing kelp for food and shelter

Giant kelp communities rely on the fast-growing species for food and shelter.

Giant kelp, or Macrocystis pyrifera, is vital to the temperate, shallow, nearshore waters where it grows. When the kelp flourishes, so do the communities that rely on the fast-growing seaweed for food and shelter.

Giant kelp has proven resilient, so far, to some stressors brought on by climate change, including severe storms and ocean heatwaves — encouraging the alga’s ability to maintain the legions of fish, invertebrates, mammals and birds that depend on it for their survival. But in a recent study published in the journal Oikos, researchers at University of California, Santa Barbara and other institutions reveal that giant kelp’s ability to take a temperature hit may come at the cost of its nutritional value.

“The nutritional quality, or the amount of nutrients in kelp tissue, seems to be changing,” said the study’s lead author Heili Lowman, a biogeochemist at the University of Nevada, Reno. “We found that these changes were associated with seawater temperatures. From a big-picture standpoint, that’s pretty important because there are a lot of things that rely on kelp as a primary food source.”

The decline in nutritional content does not bode well for the consumers of kelp in and around the Santa Barbara Channel, including sea urchins and abalone, as well as intertidal beach hoppers and other invertebrates that consume the kelp wrack that washes up on the shore.