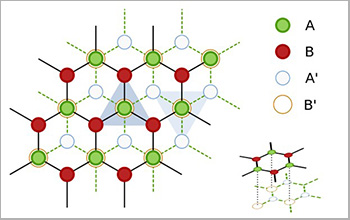 Theoretical physicists conducting research at The University of Texas at Dallas have observed a rare phenomenon called the quantum anomalous Hall effect in a very simple material. Previous experiments to detect the effect — when a material exhibits ferromagnetism and ferroelectricity simultaneously — only rarely found the phenomena in complex materials.

The effect was observed in bilayer graphene, a naturally occurring, two-atom thin layer of carbon atoms arranged in two stacked honeycomb-like lattices. The results of the study, partially funded by the U.S. National Science Foundation, are published in Nature.

“When the rare quantum anomalous Hall effect was investigated previously, the materials studied were complex,” said Fan Zhang, a theoretical physicist and co-author of the study. “By contrast, our material is comparably simple, since it just consists of two layers of graphene and occurs naturally.

“We predicted that there would be five families of states in bilayer graphene that compete with each other to be the ground state [the lowest-energy state in a quantum system]. Four have been observed in the past. This is the last one and the most challenging to observe.”

The researchers found eight different ground states in bilayer graphene that exhibit the quantum anomalous Hall effect in the fifth family. By applying small external electric and magnetic fields and controlling the sign of charge carriers, the team was able to change the state of the bilayer graphene.

“We predicted, observed, elucidated and controlled a quantum anomalous Hall octet, where three striking quantum phenomena — ferromagnetism, ferroelectricity and zero-field quantum Hall effect — can coexist and even cooperate in bilayer graphene,” Zhang said. “Now we know we can unify ferromagnetism, ferroelectricity and the quantum anomalous Hall effect in this simple material.”

The ability to precisely control the electronic properties of bilayer graphene could make it a potential material for next generation quantum information applications.