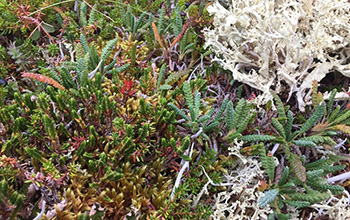 In Star Trek, characters carry a little handheld device called a tricorder that they can point at objects to analyze and identify them. When the show’s writers cooked up the idea in the 1960s, it was purely science fiction, but a paper in New Phytologist takes the idea a step closer to reality.

U.S. National Science Foundation-funded researchers at the Field Museum and other institutions used a handheld device that looks like a ray gun to record how plant leaves on Alaskan mountains reflect light. And, it turns out, different populations of plants of the same species — for instance, plants living on neighboring mountaintops — reflect light differently, in ways that echo their genetic variation from each other.

All living things contain DNA, and the more similar two organisms’ DNA is, the more closely related to each other they are. That’s true between and within species — a human’s DNA is more similar to a chimpanzee’s than to a dog’s, because humans are more closely related to chimps; our DNA is closer to a cousin’s than to a random stranger’s on the other side of the world. The same is true for plants: even in a single species, there are variations in DNA from one population to another.

Genetic research has shown that sometimes these variations appear at a very fine scale — for instance, plants from one species on one mountaintop can form groups that have slightly different DNA than the same species on a mountaintop just a few miles away. When populations split, that means they are not sharing pollen or seeds and are genetically isolated.

Scientists study these differences in DNA to tell one plant population from another, but it is an arduous task — they must collect the plant samples, store them, get permits to move them to the lab, then go through the many steps to sequence the plant’s genetic code and compare it. The process takes weeks or even months.

In the new study, however, the researchers found another method to determine how closely related two plant populations are to each other, one that could eventually be done almost instantaneously out in the field. That’s where the ray guns come in.

Spectroradiometers are instruments that measure how much light reflects off a surface and what wavelengths that light contains. The instrument itself fits in a backpack, with a handheld probe attached to a fiber optic cable that looks like a ray gun. Agricultural scientists use these instruments to analyze the light bouncing back from leaves to detect disease. The new study revealed that the light bouncing off leaves varies from one population of plants to the next, giving the latter-day ray guns a place in botanists’ arsenals.

“Answering the challenge of global warming requires information on how plants are responding,” says Sam Scheiner, a program director in NSF’s Division of Environmental Biology. “Being able to quickly identify genetic differences among individuals and species is an important step in that direction.”