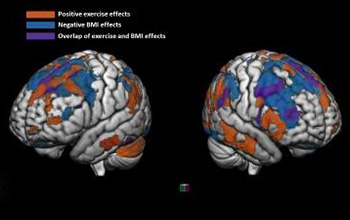 “It didn’t matter what kind of physical activity children were involved in — it only mattered that they were active,” says Caterina Stamoulis, principal investigator on the study and director of the Computational Neuroscience Laboratory at Boston Children’s Hospital. “Being active multiple times per week for at least 60 minutes had a widespread positive effect on brain circuitry.”

With support from the U.S. National Science Foundation, the researchers tapped data from the long-term Adolescent Brain Cognitive Development study. They analyzed functional magnetic resonance imaging data from 5,955 9- and 10-year-olds and crunched these data against data on physical activity and BMI, using advanced computational techniques.

“Early adolescence is a very important time in brain development,” says Stamoulis. “It’s associated with a lot of changes in the brain’s functional circuits, particularly those supporting higher-level processes like decision-making and executive control. Abnormal changes in these areas can lead to risk behaviors and deficits in cognitive function that can follow people throughout their lifetime.”

Added Sylvia Spengler, a program director in NSF’s Office of Advanced Cyberinfrastructure, “This project has the potential to inform issues in brain development and long-term cognitive function. It is encouraging to see this award be so productive.”