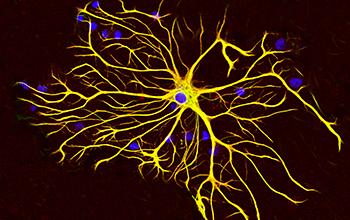 Repetition can be useful if you’re trying to memorize a poem, master a guitar riff, or just cultivate good habits. When this kind of behavior becomes compulsive, however, it can get in the way of normal life — an impediment sometimes observed in illnesses such as Tourette’s syndrome and autism spectrum disorders.

Now, with partial support from NSF’s Physics of Living Systems Program, scientists at Rockefeller University have identified a brain circuit that underlies repetition, a finding that may shed light on compulsive behavior in humans.

“Understanding the molecular mechanisms underlying behavior is one of the most challenging problems in science today, and this research is a big step forward in this direction,” says Krastan Blagoev, a program director in NSF’s Division of Physics.

Studying the microscopic roundworm C. elegans led the researchers to find that defects in one protein cause animals to reorient themselves over and over again.

Described in Nature Communications, these observations suggest that similar mechanisms may drive repetitive behavior in a range of animals, including humans.

The scientists set out to understand how astrocytes, star-shaped cells found in mammals’ brains, help neurons do their job. Astrocytes are thought to be responsible for disposing of excess neurochemicals at synapses, the connections between neurons.

The task is vital because if chemicals are not removed in a timely fashion, they can stimulate neurons in unexpected ways, disrupting normal brain function.

To better understand this process, Menachem Katz, a researcher at Rockefeller University, looked to C. elegans CEPsh glial cells, which he suspected to be the worm equivalents of astrocytes.

Katz and his colleagues used mRNA sequencing to show that mouse astrocytes and CEPsh glia have similar genetic signatures, confirming his suspicion. Among other commonalities, both cell types produce the protein GLT-1, the mammal version of which is responsible for clearing the chemical glutamate away from synapses.

The finding gave the scientists a unique opportunity to define how astrocytes and GLT-1 work.

The research suggests that abnormal glutamate secretion may underlie repetitive behaviors across the animal kingdom — raising the possibility that it may be relevant to understanding pathological repetition in humans.