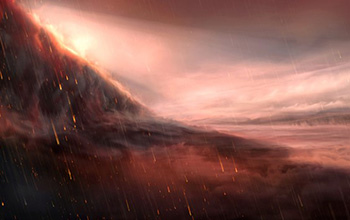 
Exoplanet’s atmospheric temperature and winds much higher than prior estimations

A team of international researchers discovered that the fiery exoplanet known as WASP-76B, approximately 640 light years from Earth, is even hotter than previously known.  The researchers, funded by the U.S. National Science Foundation, published the findings in The Astrophysical Journal Letters.

The scientists captured high-resolution spectra of ionized calcium on the exoplanet, which indicates extreme atmospheric temperatures or winds. WASP-76b, discovered in 2016 and known as a “hot Jupiter” for its extremely high temperature, orbits its F-type star (which is hotter than Earth’s sun) in 1.8 Earth days.

“As we do remote sensing of dozens of exoplanets, spanning a range of masses and temperatures, we will develop a more complete picture of the true diversity of alien worlds — from those hot enough to harbor iron rain to others with more moderate climates, from those heftier than Jupiter to others not much bigger than Earth,” said co-author Ray Jayawardhana, an astronomer at Cornell University.

“It’s remarkable that with today’s telescopes and instruments, we can learn so much about the atmospheres — the constituents, physical properties, presence of clouds and even large-scale wind patterns — of planets that are orbiting stars hundreds of light-years away.”

The researchers used Gemini North, a telescope that’s part of the international Gemini Observatory, a program of NSF’s NOIRLab, in their discovery.