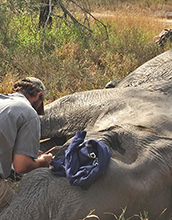 Scientists have pinpointed the genes that lead to tuskless African elephants.

In regions of Africa wracked by heavy poaching, scientists have observed an increasing number of African elephants without their iconic white tusks, prized in the multibillion-dollar wildlife black market. But there has been no direct evidence indicating how this was happening or why this trait was occurring exclusively in female elephants.

Now a U.S. National Science Foundation-supported study led by researchers at Princeton University and the University of Idaho has found that two genes associated with mammal tooth development are at the center of the tuskless elephant phenomenon.

“It’s easy to think that in animals like elephants, which have few offspring over their lifespans, such strong selective changes might not be observed in what is essentially real-time,” said Jodie Jawor, a program director in NSF’s Division of Integrative Organismal Systems. “This shows the incredible selective power human actions can have on the wild animals around them.”

The findings were published in the journal Science. Co-lead authors are Shane Campbell-Staton and Brian Arnold, researchers at Princeton University.

“Elephants are such an iconic species in the savanna ecosystem, and now we have a better understanding of how human activity is impacting them,” said Campbell-Staton.

Collecting survey data and blood samples was key to unraveling the tuskless mystery.

The researchers focused their efforts on African bush elephants  in Gorongosa National Park in Mozambique. These elephants are Earth’s largest terrestrial animals and reach 13 feet tall, distinguishing them from their smaller cousins, African forest and Asian elephants. Their tusks can measure up to six feet long and can weigh up to 50 pounds each, with the tusks of some male elephants so large they drag on the ground.

From 1977 to 1992, the Mozambique Civil War ravaged the park, with opposing combatants poaching elephants for ivory and meat. The conflict led to a rapid decline in the elephant population, from more than 2,500 to some 200 after the war. Along with the steep decline, there was an increase in tuskless female elephants, from 18.5% to 50.9%. Male tuskless elephants have not been seen in the park, but there have been rare anecdotal sightings elsewhere.

Arnold said the researchers used simulated numerical models and statistical analyses to determine that a tuskless female elephant was five times more likely to survive versus one with tusks during the war, an example of strong selection pressure created by poachers.

“Tusks suddenly became a liability, even though in natural circumstances, tusks are very useful organs for elephants,” said Arnold. “There was intense hunting pressure on tusked females. Tuskless females had a huge competitive advantage.”