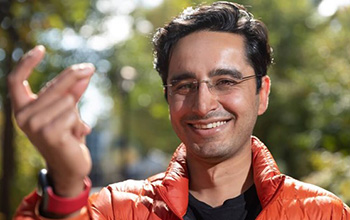 Researchers find the finger snap has the highest acceleration the human body produces.

The snapping of a finger was first depicted in ancient Greek art around 300 B.C. Today, that same snap initiates evil forces for the villain Thanos in Marvel’s latest “Avengers” movie. That inspired a group of U.S. National Science Foundation-funded researchers at Georgia Tech to study the physics of a finger snap and determine how friction plays a critical role.

Using an intermediate amount of friction, not too high and not too low, a snap of the finger produces the highest rotational acceleration observed in humans, even faster than the arm of a professional baseball pitcher. The results were published in the Journal of the Royal Society Interface.

Their results might one day inform the design of prosthetics meant to imitate the wide-ranging capabilities of the human hand. Bhamla said the project is also a prime example of what he calls curiosity-driven science, where everyday occurrences and biological behaviors can serve as data sources for new discoveries.

“For the past few years, I’ve been fascinated by how we can snap our fingers,” Bhamla said. “It’s really an extraordinary physics puzzle right at our fingertips that hasn’t been investigated closely.”

John Long, a program director in NSF’s Division of Integrative Organismal Systems, said that the research “is a great example of what we can learn with clever experiments and insightful computational modeling. By showing that varying degrees of friction between the fingers alters the elastic performance of a snap, these scientists have opened the door to discovering the principles operating in other organisms, and to putting this mechanism to work in engineered systems such as bioinspired robots.”

The researchers believe that the results open a variety of opportunities for future study, including understanding why humans snap at all, and if humans are the only primates to have evolved this physical ability.