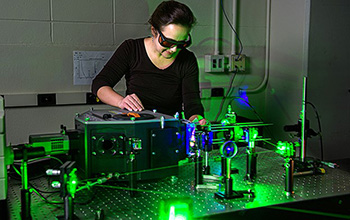 
Discovery could open a new frontier of clean energy

Biophysicists are studying artificial photosynthesis as a sustainable source of energy.

Humans can do lots of things plants can’t do: walk around, talk, hear and see and touch. But plants have one major advantage over humans. They can make energy directly from the sun.

That process of turning sunlight directly into usable energy — called photosynthesis — may soon be a feat humans can mimic to harness the sun’s energy for clean, storable, efficient fuel. If so, it could open a whole new frontier of clean energy. Enough energy hits the Earth in the form of sunlight in one hour to meet human civilization’s energy needs for an entire year.

Wind power and solar power, harnessed by photovoltaic cells, are the two major forms of clean energy available. Adding a third — synthetic photosynthesis — would dramatically change the renewable energy landscape. The ability to store the energy easily, without requiring bulky batteries, would dramatically improve the ability to power society cleanly and efficiently.

Both wind turbines and photovoltaics have downsides in terms of environmental effects and complicating factors. But biophysicist Yulia Pushkar of Purdue University hopes artificial photosynthesis might be able to bypass those pitfalls.

“We and other researchers around the world are working incredibly hard to try to come up with accessible energy,” Pushkar said. “Energy that is clean and sustainable we can create with nontoxic, easily available elements. Artificial photosynthesis is the way forward.”

Now, U.S. National Science Foundation-funded scientists are mimicking the process by building an artificial leaf analog that collects light and splits water molecules to generate hydrogen. Hydrogen can be used as a fuel by itself via fuel cells or added to other fuels such as natural gas, or built into fuel cells to power everything from vehicles to houses to small electronic devices, laboratories and hospitals.

The discovery, an insight into the way water molecules split during photosynthesis, was published in Chem Catalysis: Cell Press.