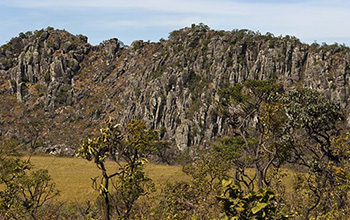 Scientists have developed a 1,600-year baseline of changes in the Amazon-Cerrado transition.

Conservation efforts on the edges of the Amazon forest, especially in light of recent deforestation by human disturbance, could help the region weather climate change, researchers say.

That assessment comes from an analysis of vegetation changes and carbon isotope signatures at 83 sites. The project, led by University of Oregon researcher Jamie Wright, established a record of soil changes associated with both climate and human activity over the last 1,600 years.

Woody vegetation expansion into savannas, the research team found, continued amid increasing moisture levels, regardless of human impacts, until only recently, mostly from rapid deforestation in the last decade. Climate modeling previously suggested that local water and carbon cycles, as well as global climate patterns, are at risk.

“The past, like most things, leaves a trace behind and with it a rich history left to be told,” said Wright.

The forest-savanna borderlands, known as the Amazon-Cerrado transition, experience broad climate and ecological influences. The study helped address the uncertainties of those influences in this tropical ecosystem.

“Carbon storage in woody savannas and forest plants at this large a scale can be a significant carbon sink,” Wright said. “Increasing tree cover also can ameliorate adverse climate change impacts, such as droughts, by influencing the hydrologic cycle and generating rain clouds.”

While the research affirmed that forest expansion has occurred in most of the past 1,600 years, the scientists found a trend of decreasing woody vegetation in the study area’s easternmost sites. The decline may reflect the prevalence of dry deciduous or semi-deciduous trees in those areas.

The next phase of understanding, the researchers said, will come from integrating plant, soil and atmospheric data to understand the influence of human activity on ecosystem-climate feedbacks as a path toward improving carbon sequestration and water conservation.