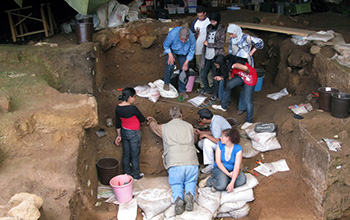 The invention of clothing was a milestone in the story of humanity. However, as furs and other organic materials used to make clothing are unlikely to be preserved in the archaeological record, the origin of clothing is still poorly understood.

A new study led by Arizona State University paleoanthropologists details what may be the earliest evidence for clothing, dating as far back as 120,000 years.

Funded in part by the U.S. National Science Foundation and published in iScience, the study describes finds unearthed in 2011 from Contrebandiers Cave, Morocco. The findings include more than 60 tools made of bone and one tool made from the tooth of a cetacean, such as a whale, dolphin or porpoise.

Among the thousands of bone fragments found in the cave, the researchers also identified carnivore bones with cut marks suggesting that the bones were skinned for fur rather than being processing for meat. Together, the tools and skinned bones provide evidence for possibly the earliest clothing in the archaeological record.

Archaeologists believe the invention of clothing was essential in enabling early humans to expand their niche from Pleistocene Africa into new environments with new ecological challenges.

“The research emphasizes the importance of a Pan-African role in the development of human cultural complexity and helps to reveal how early humans were able to expand to different areas and environments,” says John Yellen, a program director in NSF’s Division of Behavioral and Cognitive Sciences.