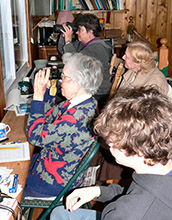 
Data collection by volunteers adds to information on bird biodiversity

Birdwatchers can reduce knowledge gaps about geographical and seasonal patterns.

There are many shortfalls in knowledge of the world’s biodiversity, and one of the most basic is the lack of knowledge about where species occur geographically. This deficiency has broad ramifications for research and conservation. A new study, published in Ecography, suggests that the development of citizen science programs to collect data has the potential to reduce this shortfall.

The researchers used bird observations entered in the eBird online program run by the Cornell Lab of Ornithology. The goal was to measure survey completeness of the world’s birds at three temporal resolutions and four spatial resolutions across the annual cycle during the period 2002 to 2018.

The global assessment of the completeness of eBird occurrence information identified the presence of strong geographic, seasonal and yearly patterns.

Occurrence information was concentrated in regions of North America and Europe, with secondary concentrations in southern India, eastern Australia and New Zealand.

The highest levels of survey completeness occurred in these same regions, with North America having the highest overall levels.

Survey completeness was higher during spring migration in temperate and boreal regions of North America and Europe when birdwatching activities tend to be more intensive.

Survey completeness increased from 2002 to 2018 in a consistent fashion across seasons, with the strongest gains in India and in tropical forests after 2012, and the weakest gains in Africa and mountain regions.

“The eBird resource leverages citizen science, high performance computing, and biogeographic modeling to enable biodiversity research on a global scale,” says Peter McCartney, a program director in NSF’s Division of Biological Infrastructure, which funded the research. “Investment in resources such as this provides a fundamental platform for addressing previously intractable questions about the biosphere.”