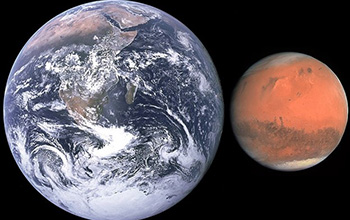 
Mars’ mass may explain its lack of water

U.S. National Science Foundation-funded researchers at Washington University in St. Louis have formed a hypothesis about the absence of liquid water on the surface of Mars. The team’s findings, published in Proceedings of the National Academy of Sciences, suggest that Mars doesn’t have enough mass to retain large amounts of water.

Evidence indicates that at one time the surface of Mars was covered in water. Images taken by rovers on the Martian surface show flood channels and valleys, geological formations consistent with large amounts of water. But no liquid water remains on the planet’s surface, and researchers have struggled to understand why.

“Mars’ fate was decided from the beginning,” said Kun Wang, senior author of the study. “There is likely a threshold on the size requirements of rocky planets to retain enough water to enable habitability and plate tectonics, with mass exceeding that of Mars.”

This revelation will help astronomers understand more about the habitability of exoplanets — planets outside the solar system — and the relationship between a planet’s size and whether it can sustain life.

“This study emphasizes that there is a very limited size range for planets to have just enough but not too much water to develop a habitable surface environment,” said co-author Klaus Mezger, a geochemist at the University of Bern. “These results will guide astronomers in their search for habitable exoplanets in other solar systems.”