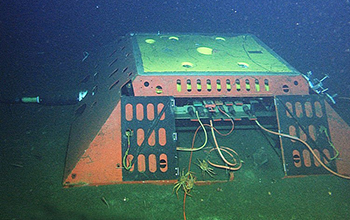 The MARS cabled observatory is a node for science instruments on the floor of Monterey Bay.

Fiber-optic cables in a global undersea telecommunications network could one day help scientists study offshore earthquakes and the geologic structures hidden deep beneath the ocean surface.

In a paper in the journal Science, NSF-funded researchers describe an experiment that turned 20 kilometers of undersea fiber-optic cable into the equivalent of 10,000 seismic stations along the ocean floor. During a four-day experiment in Monterey Bay, the scientists recorded a 3.5 magnitude quake and seismic scattering from underwater fault zones.

Their technique, which they had previously tested with fiber-optic cables on land, could provide much-needed data on quakes that occur under the sea surface, where few seismic stations exist.

“There is a huge need for seafloor seismology,” said Nate Lindsey of UC Berkeley, lead author of the paper. “Any instrumentation you get out into the ocean, even if it is only the first 50 kilometers from shore, is very useful.” Lindsey and Jonathan Ajo-Franklin, a geophysicist at Rice University in Houston, led the experiment with the assistance of Craig Dawe of MBARI, which owns the fiber-optic cable.

The cable stretches 52 kilometers offshore to the first seismic station on the floor of the Pacific Ocean, placed 17 years ago. A permanent cable to the Monterey Accelerated Research System (MARS) node was laid in 2009, 20 kilometers of which were used in this test.

The goal of the researchers’ efforts is to use fiber-optic networks around the world — more than 10 million kilometers in all, on both land and under the sea — as sensitive measures of Earth’s movement, allowing earthquake monitoring in regions that don’t have ground stations such as those that dot much of earthquake-prone California and the Pacific Coast.