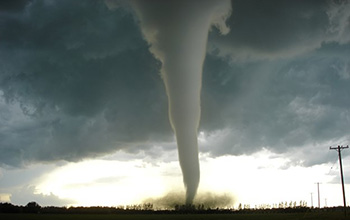 A new study looks at why North America is the global tornado hot spot.

The eastern half of the U.S is one of the principal hot spots for severe thunderstorm activity, especially tornadoes. The standard explanation is the combination of high terrain to the west and the Gulf of Mexico to the south.

A U.S. National Science Foundation-funded study published in the Journal of Climate by Purdue University scientists largely overturns one-half of this long-standing hypothesis. The scientists used a global climate model to conduct climate simulation experiments testing the hypothesis by “flattening” the North American terrain or “filling in” the Gulf of Mexico with land.

“In our climate system, there are large-scale environmental ‘pockets’ that harbor hazardous weather events,” said Varavut Limpasuvan, a program director in NSF’s Division of Atmospheric and Geospace Sciences. “Through novel modeling experiments, this study examined the relative importance of two surface properties, terrain elevation and land-sea contrast unique to this region.”

The research makes it clear that there is more to learn about why North America is a hot spot for severe thunderstorms and tornadoes and, more generally, how severe weather may change in the future due to climate change.