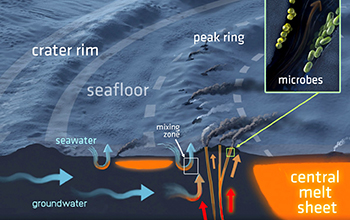 
Chicxulub crater may have harbored a vast, long-lived hydrothermal system

3D cross section of the hydrothermal system in the Chicxulub impact crater.

A new study reveals that the Chicxulub impact crater may have harbored a vast and long-lived hydrothermal system following the catastrophic impact event linked to the extinction of the dinosaurs 66 million years ago.

The results of the National Science Foundation-funded study are published in the journal Science Advances.

The Chicxulub impact crater, roughly 180 kilometers (about 110 miles) in diameter, is the best-preserved large impact structure on Earth and a target for exploration of several impact-related phenomena. In 2016, a research team supported by the International Ocean Discovery Program and International Continental Scientific Drilling Program drilled into the crater, reaching a depth of 1,335 meters (close to a mile) below the seafloor.

“Imagine an undersea Yellowstone Caldera, but one that is several times larger and produced by the staggering impact event that resulted in the extinction of the dinosaurs,” says lead author David Kring at the Lunar and Planetary Institute of the Universities Space Research Association.

The team found evidence that subsurface rivers of water were heated and driven upwards toward the boundary between the floor of the impact crater and the bottom of the Yucatán Sea. The hot water streamed around the edges of a pool of impact-generated magma approximately 3 kilometers (nearly 2 miles) thick, percolated through fractured rock, and rose to the seafloor where it vented into the sea.

The hot water system was particularly intense in an uplifted range of mountains on the seafloor that form a ring around the center of the crater 90 kilometers (56 miles) in diameter. The rock core recovered from the ring is crosscut by fossil hydrothermal conduits that are lined with multi-colored minerals, some, appropriately enough, a fiery red-orange color.

Nearly two dozen minerals precipitated from the fluids as they coursed through the rock, replacing the rock’s original minerals.

“As massive as this impact was, even larger impact structures date back to Earth’s early history, pointing to impact cratering as a fundamentally important heat engine in planetary systems,” says Kevin Johnson, a program director in NSF’s Division of Ocean Sciences.