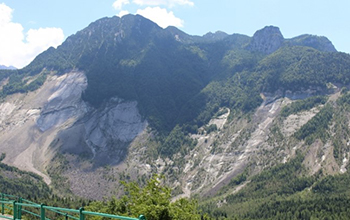 The mountainside behind the Vajont Dam in Italy, where a massive landslide occurred.

Engineers at Duke University have developed a comprehensive new model of deep-seated landslides, and demonstrated that it can accurately recreate the dynamics of historic and current landslides.

The model points to the temperature of a thin layer of clay at the base of the landslide as critical to the potential for sudden cataclysmic failure. The approach is currently being used to monitor an evolving landslide in Andorra and suggests methods for mitigating the risk of its escalation as well as those of future deep-seated landslides.

The results of the National Science Foundation-funded study appear in the Journal of Geophysical Research – Earth Surface.

“I published a paper more than a decade ago that explained what happened at the Vajont Dam, one of the biggest manmade disasters of all-time,” said Manolis Veveakis, a civil and environmental engineer at Duke. “But that model was constrained to that specific event. This model is more complete. It can be applied to other landslides, providing stability criteria and guidance on when and how they can be averted.”

The disaster Veveakis is referring to occurred at the Vajont Dam, one of the tallest in the world at 860 feet, in northern Italy in 1963. Nearly 10 billion cubic feet of rock plummeted down the gorge and into a lake at almost 70 miles per hour. That created a tsunami more than 800 feet tall that crashed over the dam, completely wiping out several small towns below and killing nearly 2,000 people.

Before the catastrophe occurred, scientists did not believe any potential landslide would result in a tsunami more than 75 feet tall.

In the new study, Veveakis and his team plug the old model’s holes. The resulting model can recreate and predict observations from very different, deep-seated landslides.