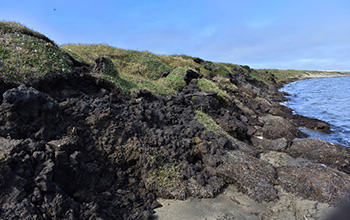 Geoscientist Michael Rawlins of the University of Massachusetts Amherst is improving the understanding of the Arctic’s carbon cycle — the way carbon is transferred among the land, ocean and atmosphere.

To better understand future trends in atmospheric carbon dioxide and climate change, a fuller picture of how carbon cycles among reservoirs in the world is needed, scientists say.

“There’s been a lot of research that has looked at the vertical flow of carbon from land to the atmosphere,” said Rawlins, whose work is funded through the U.S. National Science Foundation-supported Beaufort Lagoon Ecosystems Long-Term Ecological Research site. Examples of what affects vertical flow include burning of fossil fuels, forest fires, leaking methane gas and emissions from thawing permafrost. But there’s another part of the cycle — the horizontal. “Far less attention has been paid to how carbon is transferred from land to the ocean via rivers,” said Rawlins.

As water flows over the land and into streams and rivers, it picks up carbon, eventually carrying it to the sea. A small, but significant amount of this dissolved organic carbon is “out-gassed” from the river water and into the atmosphere as a greenhouse gas. What remains flows into the ocean, where it becomes a key part of coastal food webs.

Yet, we know relatively little about these oceanward, lateral flows of carbon — especially in the Arctic, where measurements are sparse and where rapid warming is leading to hydrologic cycle intensification, permafrost thaw, increased runoff and coastal erosion.

That’s where the new papers, published in the Journal of Geophysical Research and Environmental Research Letters, come in.

Rawlins and the co-authors modified a numerical model that accurately captures the seasonal accumulation of snow, as well as the freezing and thawing of soils, by adding in the production, decomposition, storage and “loading” of dissolved organic carbon to streams and rivers. The model now simulates the amount of carbon running off into the region’s rivers.

Roberto Delgado, a program director in NSF’s Office of Polar Programs, added, “Projections from computational models such as these demonstrate possible consequences to the carbon cycle in Arctic coastal zones, with implications for freshwater transport and local food webs, and emphasize the need for sustained long-term observations connected to these processes.” 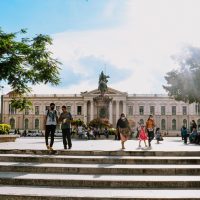