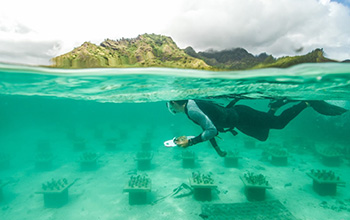 Corals are the foundation species of tropical reefs worldwide, but stresses ranging from overfishing to pollution to warming oceans are killing corals and degrading the critical ecosystem services they provide.

Because corals provide habitat for many other species, scientists have known that the loss of corals results in the loss of other reef species. But the importance of coral species diversity was less understood.

Now a study by researchers Cody Clements and Mark Hay at Georgia Tech offers both hope and a potentially grim future for damaged coral reefs. In a paper published in Science Advances, the researchers found that increasing coral richness by “outplanting” a diverse group of coral species together improves coral growth and survivorship.

The finding may be especially important in the early stages of reef recovery following large-scale coral loss, and in supporting healthy reefs that in turn support fisheries, tourism and coastal protection from storm surges.

The research was conducted at the Mo’orea Coral Reef Long-Term Ecological Research site supported by the U.S. National Science Foundation.

The scientists call for additional research to better understand and harness the mechanisms producing these species interactions with the aim of improving reef conservation and promoting more rapid and efficient recovery of degraded reefs.

The ecological pendulum swings the other way, too. If more coral species are lost, the synergistic effects could threaten other species in what Clements and Hay term a “biodiversity meltdown.”

The researchers traveled to Mo’orea, French Polynesia, in the tropical Pacific Ocean, where they planted coral gardens differing in coral species diversity to evaluate the importance of interactions among corals as they grew and interacted through time.

“We’ve done the manipulations, and the corals should be competing with each other, but in fact they do better together than they do on their own,” said Hay.