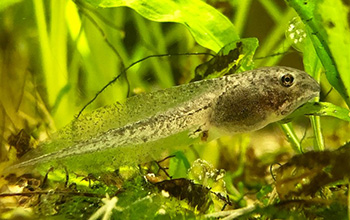 
Spring in the Northeast US is now earlier

Driven by climate change, spring in the Northeastern United States is now earlier and more variable in temperature than it used to be, a shift that has rippled through ecosystems. Among the most severely affected are spring-breeding amphibians such as wood frogs, who may be lured out of the mud to mate too early.

When winter comes rushing back in, adult wood frogs will likely survive the chill — but their newly laid eggs may be at risk. But the impact doesn’t end there, according to new research by Binghamton University scientists.

Later broods of hatchlings whose parents endure freezing temperatures associated with an additional winter storm are larger but less resilient to the effects of road salt, a common wetland pollutant, according to Nicholas Buss, Lindsey Swierk and Jessica Hua, researchers at Binghamton University who published their results in Frontiers in Zoology.

The research focused on several populations of wood frogs in western Pennsylvania, which enter breeding season between mid-March and mid-April. It also addressed a common but sometimes overlooked environmental pollutant: salt.

Every winter 10 million metric tons of road salt are applied to North American roadways, washing off in the melting snow and spring rain. The runoff can increase the salinity of nearby wetlands and prove toxic to freshwater species such as amphibians.

Amphibians are an essential component of wetland ecosystems. As tadpoles, amphibians feed on algae, increasing water clarity and quality in wetlands. Tadpoles also serve as prey to many species of aquatic invertebrates, making them important contributors to the cycling of nutrients within wetland ecosystems.

Jeremy Wojdak, a program director in NSF’s Division of Environmental Biology, added, “How multiple stresses like climate change and pollution interact to affect organisms’ survival and reproduction is critically important to understand, as nearly all species are facing numerous changes to their habitats. This study of breeding amphibians shows us that the outcomes will not always be easy to anticipate.”