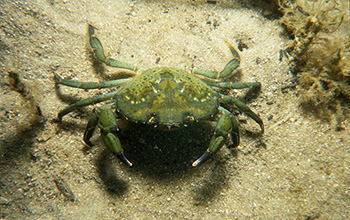 Green crabs are spreading on the U.S. West Coast.

The green crab, Carcinus maenas, is a widely distributed invasive species that eventually alters its new environment. It’s assumed that such species have high genetic diversity, or a variety of characteristics allowing them to adapt and thrive.

But the green crab has low genetic diversity, while still spreading rapidly in a new part of the world.

A U.S. National Science Foundation-funded study led by Carolyn Tepolot of the Woods Hole Oceanographic Institution is investigating the adaptive mechanisms of the green crab along the west coast of North America, where it has shown extensive dispersal in the last decade despite minimal genetic diversity.

The results are published in Molecular Ecology. The project is a collaboration among scientists at WHOI, Portland State University, the Smithsonian Environmental Research Center and the University of California, Davis.

“Invasive species like these are generally unwelcome,” Tepolt said. “Green crabs can compete with native species, rip up eelgrass ‘nurseries,’ and eat small shellfish before they have a chance to be harvested.”

The study focuses on a Pacific Northwest population of green crab that has expanded in the last 35 years from a single source. Marine invasive species, such as green crabs, often spread across thousands of kilometers of ocean, spanning several ecosystems.

Using six U.S. West Coast locations across more than 900 miles from central California to British Columbia, the team examined the species’ genetic structure. While this population has lost a large amount of overall genetic diversity relative to its European source, cold tolerance appears to be under strong genetic selection from north to south across its West Coast range, perhaps driving its expansion.