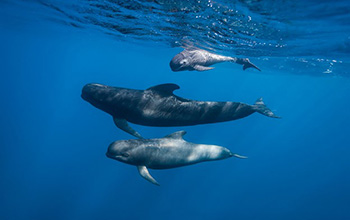 
Phenomenon affecting where marine mammals are distributed relative to their prey

Climate change is redistributing biodiversity globally. Such distributional shifts of organisms often follow the speed and direction of environmental changes. U.S. National Science Foundation-funded research by biologists at Stony Brook University reveals that this phenomenon is affecting where large marine mammals are distributed relative to their prey , which could have important implications for marine food web dynamics. Their findings are published in Scientific Reports.

Marine mammals, or endotherms, such as whales and dolphins, are often assumed to shift their movements and distribution in response to warming waters more slowly than their ectothermic prey, such as fish and squid, whose growth and productivity is directly impacted by water temperature.

Since marine mammals are large, highly mobile and occur across wide geographic ranges, distributional shifts in these species are difficult to quantify. In this study, data from fisheries bycatch and stranding events are used to examine changes in the distribution of long-finned pilot whales and their prey relative to climate velocity, which describes the pace of climate change, in a rapidly warming region of the Northwest Atlantic.

“We found that long-finned pilot whales in the Northeast U.S. shifted poleward over a 25-year period as water temperatures warmed rapidly — and at a very fast rate,” said Lesley Thorne, a marine biologist at Stony Brook University and the paper’s lead author. “The question was whether they were following rapidly shifting prey species or responding directly to environmental change.”

Thorne and co-author Janet Nye, a marine biologist at the University of North Carolina, analyzed trends in water temperature and the distribution of fish, squid and long-finned pilot whales from 1992 to 2016. They found that the poleward shift in pilot whale distribution was faster than expected and more than three times the rate of fish and invertebrate prey species.

Petra Lenz, a program director in NSF’s Division of Ocean Sciences, added, “Biogeographic shifts in marine organisms are well documented. But explaining the ‘why’ of a change has been more difficult. This team’s surprising conclusion underscores the importance of studies to understand and predict community shifts in response to environmental change.”