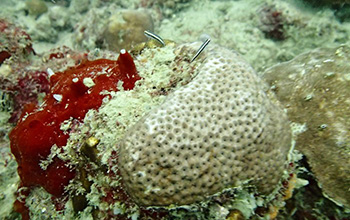 Corals’ microbiomes are the subject of a new study. Here, Siderastrea radians in the Caribbean Sea.

The microbiomes of corals — which comprise bacteria, fungi and viruses — play an important role in corals’ ability to tolerate rising ocean temperatures, according to research led by Penn State scientists.

The U.S. National Science Foundation-funded team also identified several genes in certain corals and the symbiotic photosynthetic algae that live inside their tissues that may play a role in their response to heat stress. “We know how complex coral communities are at the human visual level,” said Mike Sieracki, a program director in NSF’s Division of Ocean Sciences. “Now we’re learning that their microbial partners, which we can’t see, help sustain coral health.”

“Prolonged exposure to heat can cause ‘bleaching’ in which photosymbionts [symbiotic algae] are jettisoned from the coral animal, causing the animal to die,” said study co-author Mónica Medina. “We found that when some corals become heat stressed, their microbiomes can protect them from bleaching. In addition, we can now pinpoint specific genes in coral animals and their photosymbionts that may be involved in this thermal stress response.”

In the study, published in Nature Communications, the researchers focused on three species of coral — the mountainous star coral, Orbicella faveolata; the knobby brain coral, Pseudodiploria clivosa; and the shallow water starlet coral, Siderastrea radians — which are known to differ in their sensitivities to heat stress.

Collected near Puerto Morelos, Mexico, each coral species harbors a unique set of photosymbionts and microbiomes. The team investigated the varying metabolic contributions of each member of the holobiont — the assemblage of a host and the many other species living in or around it — to the corals’ overall stress tolerance and identified differences in gene-expression patterns related to these metabolic activities.

“We know that heat stress resulting from climate change can disrupt coral metabolism and result in bleaching,” said Medina. “Therefore, it is important to understand the different contributions of the holobiont members and how these metabolic activities change in response to heat stress.”