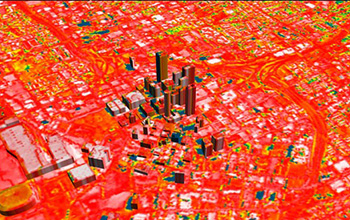 Exposure to dangerous temperatures has doubled since the mid-1980s.

Between climate change and the “urban heat island” effect, many of the world’s cities are sizzling. Extreme heat already affects almost 2 billion urban residents worldwide, according to a new study led by UC Santa Barbara researchers.

The U.S. National Science Foundation-funded paper, published in Proceedings of the National Academy of Sciences, is the first to examine in fine detail global trends in extreme heat exposure across urban areas. The study spanned more than 13,000 urban settlements over three and a half decades. The authors found that exposure to dangerous temperatures increased by 200% globally since the mid-1980s, with poor and marginalized people particularly at risk.

“Our study reveals that exposure to extreme heat in urban areas is much more widespread — and increasing in many more areas — than we had previously realized,” said co-author Kelly Caylor, an environmental scientist at the University of California, Santa Barbara. “Almost 1 in 5 people on Earth experienced increases in exposure to urban heat over the past 30 years.”

The scientists were able to distinguish between the contributions from population growth and rising temperatures. They found that population growth contributed two-thirds of the year-to-year increase, with warming accounting for one-third. They plan to further distill the independent inputs from climate change versus the urban heat island effect in an upcoming paper.

The threat of extreme heat varies at regional and even city levels, a topic the authors plan to examine further. About a quarter of the global change in extreme heat exposure came from just 25 urban settlements. The top four were: Dhaka, Bangladesh; Delhi, India; Kolkata, India; and Bangkok, Thailand.

Still, this issue is far from being limited to big cities. Nearly 6,000 municipalities had a significant increase in extreme heat exposure, the authors said.

Liz Blood, a program director in NSF’s Division of Environmental Biology, added, “This study demonstrates the importance of both the social and environmental factors contributing to urban heat stress. It raises important questions about urban sustainability and impact equity in urban populations.”