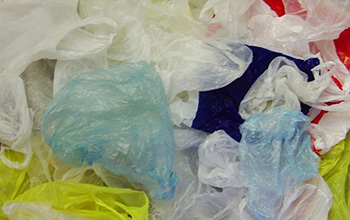 Researchers supported by the U.S. National Science Foundation studied how components in plastic bags decompose during exposure to sunlight while in water. Their findings are published in the journal Environmental Science & Technology.

Once plastic pollution gets into the environment, its fate is still largely unknown, especially in aquatic ecosystems. Some plastic items, such as polyethylene shopping bags, float in water, which exposes them directly to the sun’s rays.

Researchers have shown that the pure polymers commonly used to make these items produce water-soluble molecules and gases when placed in ultraviolet light, a component of sunlight. However, plastics in consumer goods aren’t pure; a variety of carbon-based organic additives and mineral additives are mixed in to give them color or make them more stable.

Collin Ward of the Woods Hole Oceanographic Institution and colleagues wanted to see how the composition of single-use shopping bags influenced the dissolved compounds generated by sunlight over short periods.

The scientists investigated what happens when polymers and additives used to manufacture plastic bags break down into microscopic molecules that are released into an aquatic environment.

Their study indicates that the additives can increase how fast solid plastic bags decompose into dissolved compounds — days rather than months.

Using plastic bags from retailers, the researchers placed pieces of the bags in containers of water and kept them in the dark or exposed them to simulated sunlight.

The samples exposed to sunlight released exponentially more compounds, breaking down into water-soluble microscopic materials that varied depending on the additives used in manufacturing.