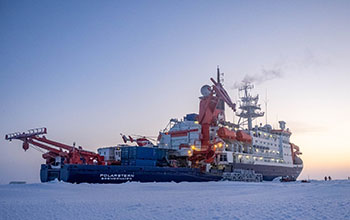 In October 2019, scientists froze a ship filled with equipment into Arctic sea ice with the intention of drifting across the Arctic Ocean for a full year, gathering data on polar atmosphere, ice and ocean conditions. However, a new study indicates there is a chance the expedition may “melt out” months before that year-end goal.

The MOSAiC (Multidisciplinary drifting Observatory for the Study of Arctic Climate) team went through extensive preparation and training for the expedition, including analyzing historic conditions. New research shows, however, that Arctic conditions have been changing so rapidly that the past may no longer be a reliable guide to today.

Scientists at the National Center for Atmospheric Research have used an ensemble of multiple climate model runs to simulate conditions along potential routes for the MOSAiC expedition, using today’s conditions in the “new Arctic.”

The results suggest that thinner sea ice may carry the ship farther than would be expected compared to historical conditions, and that the sea ice around the ship may melt earlier than the 12-month expedition goal. Of the 30 model runs analyzed in the new study, five (17%) showed melt-out in less than a year.

The research, published in the journal The Cryosphere, was funded by the National Science Foundation, which is NCAR’s sponsor.

The ensemble of 30 model runs used current climate conditions and reflected the breadth of ways sea ice could form, drift and melt in a 2020 climate. The study did not incorporate 2019 ice conditions and is not a forecast of the track the ship will take over its year-long expedition.

“The whole point of MOSAiC is to understand the new Arctic and how things have changed over the last 10 years,” said Alice DuVivier, an NCAR climate scientist and lead author of the new study. “This model gives us an understanding of the range of drifting possibilities the expedition could face in the new ice regime.”

Scientists have been gathering data on Arctic sea ice extent, which can cover millions of square miles in winter, since 1979 when satellites began capturing annual changes in ice cover. “The changes in the Arctic system are so incredibly rapid that even our satellite observations from 15 years ago are unlike the Arctic today,” said Marika Holland, an NCAR scientist and co-author of the study. “Now there is thinner ice, which moves more quickly, and there is less snow cover. It is a totally different ice regime.”