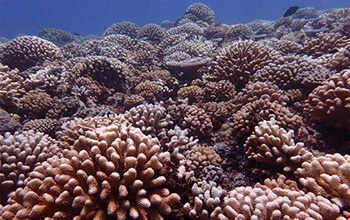 
Finding has implications for the long-term health of coral reefs

The coral reef in Moorea before bleaching killed the larger corals in 2019.

Certain brightly colored coral species dotting the seafloor may appear indistinguishable to divers and snorkelers, but Florida State University researchers have found that these genetically diverse marine invertebrates vary in their response to ocean warming, a discovery that has implications for the long-term health of coral reefs.

The scientists used molecular genetics to differentiate among corals that look nearly identical and to understand which species best coped with thermal stress. Their research, which took place at the U.S. National Science Foundation-funded Moorea Coral Reef Long-Term Ecological Research Site, was published in the journal Ecology.

“Being able to recognize the differences among coral species that cannot be identified in the field — known as ‘cryptic species’ — will help us understand new ways coral reefs maintain resilience in the face of disturbance,” said Scott Burgess, the paper’s lead author.

The researchers were studying the coral ecosystem at the island of Moorea in French Polynesia when a coral bleaching event struck in 2019.

Corals get their color from algae that live in their tissues and with which they have a symbiotic relationship. But when corals are stressed — by high water temperature, for example — algae leave the coral, which turns white, hence the term “bleaching.” Bleached corals are not dead, but they are more vulnerable and more likely to die.

Most of the corals at Moorea belong to the genus Pocillopora. During the event, the researchers saw that about 72% of the coral colonies from this genus bleached, and up to 42% died.

At first, it seemed that the largest colonies were more likely to bleach, but when the scientists examined tissue samples from the coral, they found that colonies belonging to a certain genetic lineage, not coral size, was most important in determining the fate of the corals.

About 86% of the Pocillopora corals that died belonged to a group that shares a set of DNA variations, which is known as a haplotype and reflects their common evolutionary ancestry.

“The good news is that not all the corals died from bleaching, and many species survived,” Burgess said. “The bad news is that the species that died is, as far as we are aware, endemic to that specific region.”

Added Daniel Thornhill, a program director in NSF’s Division of Ocean Sciences, “This intriguing research demonstrates the importance of molecular genetics in understanding marine ecology. What looked like size-based mortality in corals turned out to be a case of some species being more temperature-sensitive than others. Such work fundamentally changes how we look at the reef ecosystem of Moorea.”