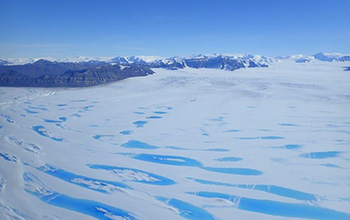 “During the 2019-2020 austral [Southern Hemisphere] summer, we observed the most widespread melt and greatest total number of melt days of any season for the northern George VI Ice Shelf,” said research scientist Alison Banwell, lead author of a U.S. National Science Foundation-funded study published in The Cryosphere.

Banwell and her colleagues studied the 2019-2020 melt season on the northern George VI Ice Shelf using satellite observations that can detect meltwater on top of the ice and within the near-surface snow.

Surface meltwater ponding is potentially dangerous to ice shelves, according to Banwell, because when these lakes drain, the ice fractures and may trigger the break-up of ice-shelves. “The George VI Ice Shelf buttresses the largest volume of upstream grounded ice of any Antarctic Peninsula ice shelf. If this ice shelf breaks up, ice that rests on land would flow more quickly into the ocean and contribute more to sea level rise than any other ice shelf on the Peninsula.”

The 2019-2020 melt season was the longest for the northern George VI Ice Shelf — the second largest ice shelf on the Antarctic Peninsula — but it wasn’t the longest melt season over the entire peninsula; that was 1992-1993. As air temperatures continue to warm, increased melting on the northern George VI Ice Shelf and other Antarctic ice shelves may lead to ice shelf break-up events and ultimately sea level rise.

“The Peninsula ice shelves are sentinels for the shelves around the rest of Antarctica,” says Paul Cutler, a program director in NSF’s Office of Polar Programs. “Understanding the impact of surface melt on ice shelf vulnerability — an impact that is happening right now — helps us more accurately project the future influence of climate on sea level rise.”