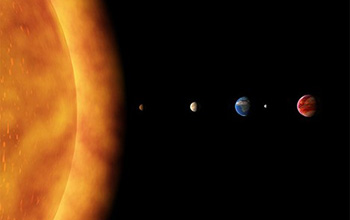 Scientists found proof of a barrier between the inner and outer regions of the young solar system.

By analyzing the composition of ancient meteorites, researchers at the Massachusetts Institute of Technology, funded by the U.S. National Science Foundation, identified evidence of a barrier between the inner and outer regions of the solar system as planets emerged from the dust and gas orbiting the sun. The team published its research in Science Advances.

Analysis suggests that billions of years ago there was a chasm, or gap, in the solar system, near the asteroid belt. The chasm could have been caused by Jupiter’s formation or by cosmic winds generated by the magnetic fields of a growing solar system.

The chasm acted as a barrier that influenced the formation of an emerging planetary system and impacted the composition of asteroids, meteorites and planets. This discovery could explain the isotopic dichotomy — why most asteroids have singular and not shared isotopic structures.

“Over the last decade, observations have shown that cavities, gaps, and rings are common in disks around other young stars,” said MIT scientist Benjamin Weiss. “These are important but poorly understood signatures of the physical processes by which gas and dust transform into the young sun and planets.”

Added lead author Cauê Borlina, “Gaps are common in protoplanetary systems, and we now show that we had one in our own solar system. That provides an answer to the weird dichotomy we see in meteorites, and provides evidence that gaps affect the composition of planets.”