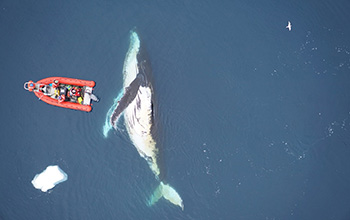 Researchers investigate a humpback whale in the surface waters near the Western Antarctic Peninsula.

An estimated 1.5 million baleen whales that lived in the icy waters of the Southern Ocean were killed between 1910 and 1970 disrupting ocean ecosystems. The whales were hunted for their blubber, meat and baleen — the plates of fringe they use to filter prey from water they ingest. A new study published in Nature by Stanford University researchers and other scientists indicates the decline of baleen whales in the Southern Ocean has surprisingly also led to a decline of krill, a primary source of sustenance for the large marine animal.

“Fifty years after we stopped hunting whales, we’re still learning what impact that had,” said Matthew Savoca, lead author of the paper. “We’re looking into ways of using this information to restore ocean ecosystems and bring whales back. Hopefully that will have benefits for everything from biodiversity conservation to fisheries yield to carbon storage.”

The scientists analyzed data from blue, fin, humpback and minke whales — all baleen whales — and discovered baleen whales eat two to three times more than previously thought. Whales that feed on fish likely eat as much or less than estimated, suggesting a correlation between the density of the food and the volume of food required for sufficient energy.

“As large baleen whales get bigger, the anatomical machinery that allows them to eat also gets relatively bigger,” said Jeremy Goldbogen, senior author of the paper. “They have evolved systems that allow them to be eating machines. That disproportionately bigger gulp size allows them to take advantage of abundant food, like krill.”

Added Daniel Marenda, a program director in the U.S. National Science Foundation’s Division of Biological Infrastructure, which in part funded the work, “This study shows that fundamental research — looking for answers to curiosity-driven questions — can result in new knowledge about the world around us, and that human actions can and do impact our environment and how it functions. It also demonstrates that investing in the next generation of scientists can yield important and impressive results.”