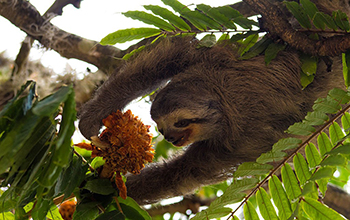 Sloths, which once roamed the Americas, ranged from tiny, cat-sized animals that lived in trees to massive ground sloths that may have weighed up to six tons. The only species we know today are two-toed and three-toed sloths — but paleontologists have long been arguing about how to classify them and their ancestors.

A study published on June 6 has shaken up the sloth family tree, overturning a longstanding consensus on how the major groups of sloths are related.

According to the results, the three-toed sloth is more closely related to a large family that included ancient elephant-sized ground sloths; the two-toed sloth appears to be the last survivor of an ancient lineage previously thought extinct.

“The results. . . not only rewrite sloth classification [but] suggest that much of what we thought we knew about how sloths evolved may be wrong,” says co-author Graham Slater, a geoscientist at the University of Chicago.

The study, published in Nature Ecology & Evolution, uses proteins in fossils to discover evolutionary relationships — marking the first time an entire lineage has been mapped with the method. Evolutionary paleobiology needs more and older data, the scientists say, and proteins could provide it.

“The very oldest DNA you can get is 800,000 years old, but in theory we should be able to get protein data from specimens that are millions of years old,” Slater said. “It opens doors we were only dreaming of.”

The research was funded by NSF’s Office of Polar Programs and Division of Environmental Biology. “This is an excellent example of how research investments on a specific subject, in this case the sloth family tree, can lead to unpredicted advances with broad benefits for understanding the evolution of species on Earth,” says Alex Isern, head of the Antarctic Sciences Section in the Office of Polar Programs.