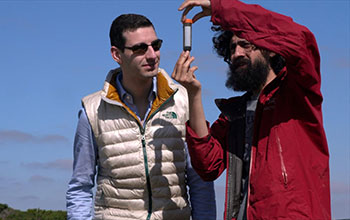 Scientists look at a sample from a marsh in the Baylands Nature Preserve in Palo Alto, California.

Crouching in the boot-sucking mud of the Baylands Nature Preserve in Palo Alto, bioengineer Manu Prakash of Stanford University peered through his Foldscope — a $1.75 origami microscope of his own invention.

He watched a large single-celled organism called Spirostomum do something that immediately made it his next research subject.

“I still remember seeing this organism swim by under the Foldscope,” said Prakash. “This is a massive cell, but it contracts in less than a blink of an eye, accelerating faster than almost any other single cell. When you aren’t expecting it, it’s like it disappears. I remember being so excited, I had to bring the cells back to the lab and take a careful look.”

This observation, made through a simple tool only five miles from Prakash’s lab, led him and colleagues to the discovery of a new form of communication between cells, which they detail in a paper published in Nature.

Without touching and without electrical or chemical signals, individual Spirostomum can coordinate their ultrafast contractions so closely that groups of them appear to shrink simultaneously — a reaction to predators that makes them release paralyzing toxins in sync.

“It’s possible this [signaling between cells] is more universal than we’ve described and is a way that many different kinds of organisms communicate,” said Arnold Mathijssen of Stanford, a lead author of the paper.

“These cells can move at tremendous speeds, generating g-forces several times those astronauts experience in rocket launches,” said Richard Cyr, a program officer in NSF’s Division of Molecular and Cellular Biosciences, which co-funded the work with NSF’s Division of Biological Infrastructure. “What this tells us about aquatic organisms is extraordinary in terms of movement and perceptions of movement. Now we need to find out if the rules discovered by this work apply to other species.”