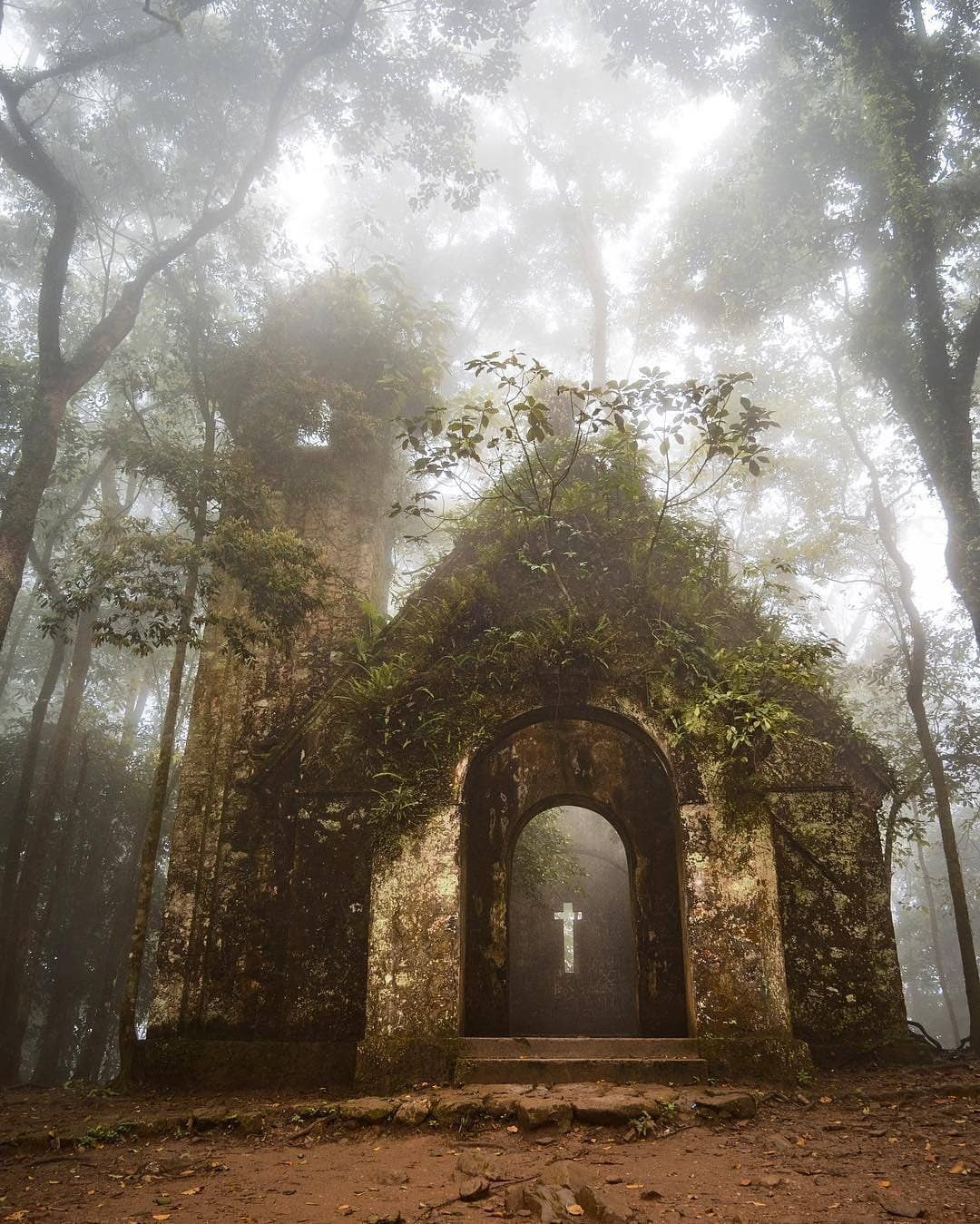 The scariest places to visit in Vietnam are extremely interesting tourist destinations for those who love to explore and learn about the history and terrain of Vietnam. And the following list will list such places, guaranteed to satisfy those who love horror and horror. When you come to these spooky places, you will inevitably feel chills of fear before strange and mysterious things.

From the early 40s of the last century, Ba Vi (Hanoi) was chosen by the French as a place to build high-class resorts and military facilities for soldiers. Currently, this place still has a lot of French architecture left, but only the frame with green moss-covered walls and interwoven tree stumps remains.

One of the favorite destinations of many young people is Ba Vi Church. Abandoned for many years, the roof of the church is no longer there, only the murky church among the luxuriant trees. The green of moss, the gray of mold, the silver of the fog create a mysterious space.

For photography and painting enthusiasts, the time-marked French architectures left in Ba Vi have become a source of creative inspiration.

Where 3600 dead were buried — Anyone who has ever visited the scenic Thay Pagoda, certainly cannot ignore Coc Cave. This is the highest cave of Sai Son mountain (Quoc Oai, Hanoi), attracting tourists from all over the world because of its long history with mysterious colors, with more than a thousand years old.

A tragic story is circulated by people around the area that this place is the grave of 3,600 Lu Gia insurgents during the anti-Han period, more than 2,000 years ago. But then during the egg fighting war, the insurgents had to drag themselves into a cave on Sai Son mountain to entrench themselves. The enemy could not chase, so he brought large rocks to cover the mouth of the cave, killing thousands of insurgents in the mountain.

More than 2,000 years later, in 1933, the pagoda along with Buddhists and the people of Sai Son broke down the cave door, built a large tank, then proceeded to collect the bones throughout the cave and pour it into the tank.

According to CNN’s poll, The Hỏa Lò Prison ranks first in the Top 5 scariest destinations in Southeast Asia. Hoa Lo Prison was built by the French in Hanoi in 1896 with the purpose of detaining Vietnamese patriots against the colonial regime.

As “hell on earth”, this place is designed around a stone wall, reinforced 4m high, 0.5m thick, reinforced by a system of barbed wire with high voltage current running through it. . , the four corners are watchtowers capable of observing every movement of the entire prison. The original design only allowed Hoa Lo to hold about 500 prisoners, but at one point this prison held nearly 2,000 inmates.

After the capital was completely liberated, Hoa Lo prison was the place to hold American pilots. Many American POWs called this barbaric prison “Hanoi Hilton Hotel”. Currently, Hoa Lo prison has become a memorial tourist destination that is loved by domestic and foreign tourists.

The church is located in Hai Ly commune, Hai Hau district, Nam Dinh province.. This place was designed and built by a French architect in 1943 but was abandoned in 1996.

Standing in this place when it is dark, in front is the immense black sea, behind is the ruined church, enveloping visitors is a feeling of loneliness to shiver. However, it is this ancient ruined beauty that attracts tourists to Hai Ly beach.

Anyone who passes through Dinh Co Street (Long Hai, Vung Tau) can’t help but be moved by the poetic beauty of the castle, but can’t help but shiver because of its gloom. Located on a hill with an area of more than 6000m2, the castle has more than 100 windows, all facing the sea.

According to people, this was the former resort of the Chinese merchant Hui Bon (Vietnamese name is Hua Bon Hoa, often called Uncle Hoa), the richest businessman in Saigon.

After building this castle, Uncle Hoa let his daughter live. Some time later, she contracted leprosy and died. Her death and the mysterious deaths of the people working here terrified the people for a long time.

Con Dao prison (Nhà tù Côn Đảo) is where the French and American troops built to brutally torture Vietnamese prisoners and this place ranks 9th in the top 10 scariest places in Asia.

This is the place where the revolutionary soldiers were detained in the two wars of resistance against France and the United States with many terrible and harsh tortures comparable to those of the Middle Ages, and led to tragic and useless deaths. same pain for many people. Many tourists must have really shivered when witnessing many models of torture at this place.

Con Dao prison is located in a prison complex located in Con Dao. This prison system was built by the French to hold prisoners who were especially dangerous for the French colonial regime such as political prisoners, death row prisoners, etc. They participated in revolutionary and patriotic movements. colonial administration, then used by the United States. detained prisoners during the resistance war against America to save the country.

Currently, the Con Dao prison complex is included in the list of 23 special national monuments of Vietnam.