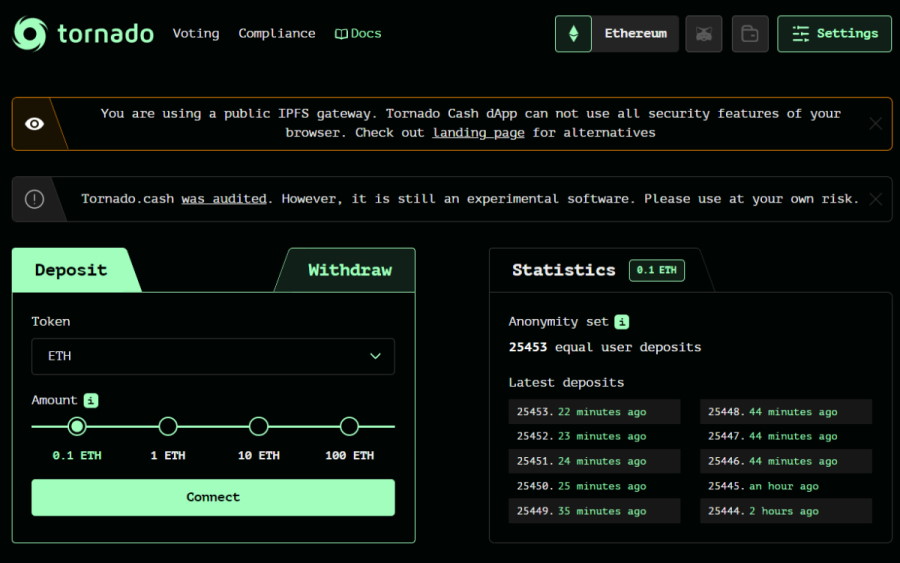 The U.S. Department of the Treasury’s Office of Foreign Assets Control (OFAC) sanctioned virtual currency mixer Tornado Cash, which has been used to launder more than $7 billion worth of virtual currency since its creation in 2019. This includes over $455 million stolen by the Lazarus Group, a Democratic People’s Republic of Korea (DPRK) state-sponsored hacking group that was sanctioned by the U.S. in 2019, in the largest known virtual currency heist to date. Tornado Cash was subsequently used to launder more than $96 million of malicious cyber actors’ funds derived from the June 24, 2022 Harmony Bridge Heist, and at least $7.8 million from the August 2, 2022 Nomad Heist. Today’s action is being taken pursuant to Executive Order (E.O.) 13694, as amended, and follows OFAC’s May 6, 2022 designation of virtual currency mixer Blender.io (Blender).

“Today, Treasury is sanctioning Tornado Cash, a virtual currency mixer that launders the proceeds of cybercrimes, including those committed against victims in the United States,” said Under Secretary of the Treasury for Terrorism and Financial Intelligence Brian E. Nelson. “Despite public assurances otherwise, Tornado Cash has repeatedly failed to impose effective controls designed to stop it from laundering funds for malicious cyber actors on a regular basis and without basic measures to address its risks. Treasury will continue to aggressively pursue actions against mixers that launder virtual currency for criminals and those who assist them.”

Treasury has worked to expose components of the virtual currency ecosystem, like Tornado Cash and Blender.io, that cybercriminals use to obfuscate the proceeds from illicit cyber activity and other crimes. While most virtual currency activity is licit, it can be used for illicit activity, including sanctions evasion through mixers, peer-to-peer exchangers, darknet markets, and exchanges. This includes the facilitation of heists, ransomware schemes, fraud, and other cybercrimes. Treasury continues to use its authorities against malicious cyber actors in concert with other U.S. departments and agencies, as well as foreign partners, to expose, disrupt, and hold accountable perpetrators and persons that enable criminals to profit from cybercrime and other illicit activity. For example, in 2020, Treasury’s Financial Crimes Enforcement Network (FinCEN) assessed a $60 million civil money penalty against the owner and operator of a virtual currency mixer for violations of the Bank Secrecy Act (BSA) and its implementing regulations.

Tornado Cash (Tornado) is a virtual currency mixer that operates on the Ethereum blockchain and indiscriminately facilitates anonymous transactions by obfuscating their origin, destination, and counterparties, with no attempt to determine their origin. Tornado receives a variety of transactions and mixes them together before transmitting them to their individual recipients. While the purported purpose is to increase privacy, mixers like Tornado are commonly used by illicit actors to launder funds, especially those stolen during significant heists.

Tornado is being designated pursuant to E.O. 13694, as amended, for having materially assisted, sponsored, or provided financial, material, or technological support for, or goods or services to or in support of, a cyber-enabled activity originating from, or directed by persons located, in whole or in substantial part, outside the United States that is reasonably likely to result in, or has materially contributed to, a significant threat to the national security, foreign policy, or economic health or financial stability of the United States and that has the purpose or effect of causing a significant misappropriation of funds or economic resources, trade secrets, personal identifiers, or financial information for commercial or competitive advantage or private financial gain.

Virtual currency mixers that assist criminals are a threat to U.S. national security. Treasury will continue to investigate the use of mixers for illicit purposes and use its authorities to respond to illicit financing risks in the virtual currency ecosystem

Criminals have increased their use of anonymity-enhancing technologies, including mixers, to help hide the movement or origin of funds. Additional information on illicit financing risks associated with mixers and other anonymity-enhancing technologies in the virtual asset ecosystem can be found in the 2022 National Money Laundering Risk Assessment.

Those in the virtual currency industry play a critical role in complying with their Anti-Money Laundering/Countering the Financing of Terrorism (AML/CFT) and sanctions obligations to prevent sanctioned persons and other illicit actors from exploiting virtual currency to undermine U.S foreign policy and national security interests. As part of that effort, the industry should take a risk-based approach to assess the risk associated with different virtual currency services, implement measures to mitigate risks, and address the challenges anonymizing features can present to compliance with AML/CFT obligations. As today’s action demonstrates, mixers should in general be considered as high-risk by virtual currency firms, which should only process transactions if they have appropriate controls in place to prevent mixers from being used to launder illicit proceeds.

As a result of today’s action, all property and interests in property of the entity above, Tornado Cash, that is in the United States or in the possession or control of U.S. persons is blocked and must be reported to OFAC. In addition, any entities that are owned, directly or indirectly, 50 percent or more by one or more blocked persons are also blocked. All transactions by U.S. persons or within (or transiting) the United States that involve any property or interests in property of designated or otherwise blocked persons are prohibited unless authorized by a general or specific license issued by OFAC, or exempt. These prohibitions include the making of any contribution or provision of funds, goods, or services by, to, or for the benefit of any blocked person and the receipt of any contribution or provision of funds, goods, or services from any such person.

Source: US Department of Treasury